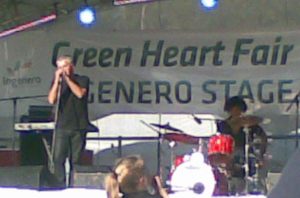 The Australian pop icon, who made his name in the ’70s band Sherbet, was the climax of the festival, a initiative of Council’s Green Heart (sustainability) campaign.

Green Heart is Council’s attempt at encouraging environmental consciousness, with many companies present to promote their green credentials.

A crowd of about 500 waited patiently in the bushy surrounds of 7th Brigade Park, nestled behind Westfield Chermside shopping complex, as Daryl hit the stage with his four piece band half an hour late.

“Coming from Melbourne, it’s like the tropics,” he said.

He mused that his doctor told him to not go in the sun.

The jovial performer soon donned a white ‘I heart BNE’ cap after his first song.

He performed some of his favourites, including Wishing Well, Rise, As The Days Go By and Howzat.

The band finished with the much anticipated The Horses, and the crowd cheered and stood up for a extended clap and sing-a-long.

Trish, a resident from Enogerra was impressed with the occasion.

“Thank you so much, it was incredible, he was dynamic,” she said.

The fair will now make its way to entertain the southside community in October and continue to awaken green spirit in Brisbane.