Review: Girl of the Golden West 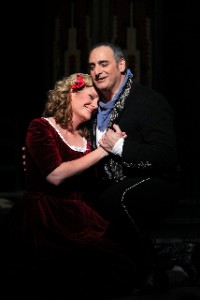 A strange mix of poker games, Italian, gun fights and high notes, Puccini’s The Girl of the Golden West combines the cultured world of opera with the 1850s gold rush in California – and somehow does it well.

The opera has a Romeo and Juliet feel to it, with Minnie, the beloved bartender’s daughter, falling for the outlaw Dick Johnson. Played by Soprana Zara Barrett and tenor Carlo Barricelli, the characters show that love still has power even in the lonely goldfields.

For a person who has never been to an opera before, the production seemed to take a long time to lift off. The first act in particular seemed to move slowly and there was little interesting tension. But the act’s saving grace was the modern use of staging and lighting.

The stage was used by director Gavin Robins to its full potential. Whenever the chorus was present, it filled the stage and the scene changes were impressive.

Robins took a fresh approach to using the bar tables as they provided projection boards and a dramatic entrance for Minnie.

The lighting was particularly effective – from the bright orange glow that initially lit the stage to the spinning red roses in Act 2. The modern lighting lifted the whole performance to another level, vastly improving an opera which could have easily become just another traditional remake.

The acting on the whole was satisfactory, although the gunfight had much to be desired. The chemistry between Minnie (Zara Barrett) and Johnson (Carlo Barricelli) was also difficult to believe. But Douglas McNicol shone in his role as the controlling sheriff and the chorus was equally as fantastic in the mob scenes.

With their awe-inspiring voices, the singers joined with the orchestra perfectly, although they were occasionally drowned out by the orchestra. But all could be forgiven when the chorus belted out a verse together – their powerful voices were simply amazing. The orchestra, conducted by Peter Robinson, was beautiful. Just closing my eyes and listening was a pleasure in itself.

The opera style did take a while to get used to, but overall this opera was an enjoyable experience.

Would I ever return to the opera after this experience? It is safe to say I will.