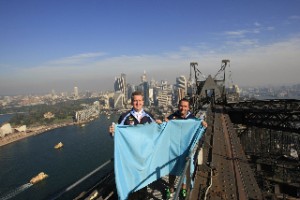 The countdown to State of Origin began today with the premiers from Queensland and New South Wales raising their states’ colours.

Queensland Premier Anna Bligh said the flag raising was a new part to a traditional bet between the premiers, where at the end of the series the losing state must fly the opponent’s flag on their bridge.

Ms Bligh said it was the first time the Maroons’ flag had been flown at the start of the annual ruggy league series and the aim was for the Maroon flag to fly atop the Sydney Harbour Bridge once more.

“It means Origin fever is now here, the friendly bet between Premiers is on, and all of Queensland is behind the Mighty Maroons,” Ms Bligh said in a press release.

West Tigers supporter Mr O’Farrell said the blues’ flag being raised on the bridge meant Ricky Stuart and the team would know the State was behind them.

“I said before the election that my Government would make NSW number 1 again- and that extends to rugby league,” Mr O’Farrell said in a statement to Newsbytes.

The bet between premiers started in 1999 with Peter Beattie and and Bob Carr. During that time the Maroons have raised the shield eight times to the Blues four.

The bet even suffered a controversial moment when in 2002 Queensland retained the shield through a drawn series. Then NSW premier Bob Carr refused to raise the Maroons flag.