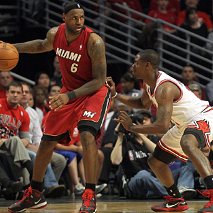 Miami returned to Chicago’s United Center holding a three games to one series lead and all the momentum following a tight overtime win back in Miami two days ago.

But current most valuable player (MVP) Derrick Rose and the Bulls were looking to force a game six back in Florida.

Playing on their home floor, Chicago seemed spurred on by the crowd and were playing with the same energy and intensity that saw them have the NBA’s best regular season record of 62 wins and 20 losses. After Bulls forward Luol Deng posterized Heat superstar Lebron James with a huge dunk, the crowd was at fever pitch.

But the two-time MVP responded making two late jump shots including a three-pointer with just seconds left on the clock to get the Heat back within four points.

During the series Miami had dominated the second quarter of almost every game. This trend continued and although guard Dwyane Wade was struggling with a nagging left shoulder injury his teammates picked up the slack to outscore the Bulls 24-13 and walk into the half time break with a 45-38 lead.

To keep their season alive the Bulls needed to have a big third quarter and led by MVP Rose and the team’s suffocating defence the home side stunned Miami’s offence to contain their opponents to only 12 points while scoring 24 of their own.

The visiting Miami Heat looked deflated as they not only faced a five point deficit heading into the fourth and final quarter but a loud and hostile Chicago crowd to make matters even worse.

Chicago took advantage of a sluggish period by the Heat causing turnover after turnover by the Heat offence which resulted in easy open court baskets for the Bulls.

A huge three-pointer by Chicago’s Ronnie Brewer off an offensive rebound by Kurt Thomas increased the lead to a game-high 12 points with 3:53 minutes remaining – forcing Heat Head Coach Erik Spoelstra to call a timeout.

Returning from the timeout Miami found some much needed energy and the struggling Wade finally found his touch running in two difficult fast break lay-ups. After James hit another three-pointer Bulls head coach Tom Thibodeau had to call for a timeout.

Down by just seven points Dwyane Wade took a step back three-pointer which he made and was fouled by Derrick Rose on the shot which resulted in a game turning four-point play then team mate James hit from long range to draw scores level at 79 with just one minute remaining.

James forced Rose into a crucial turnover and then made a tough contested jump shot to silence the once boisterous Chicago crowd and put the Heat in the lead with only seconds remaining.

Chicago’s troubles down the stretch continued in the closing stages of game five as the Heat’s defensive pressure did not allow the Bulls to get a quality shot to tie the game as Lebron James showed his defensive ability by rejecting Rose’s last second three-point attempt.

The Miami Heat got the win on Chicago’s home court to win the series 4-1 and advance to a meeting with the Western Conference Champions Dallas Mavericks in a repeat of the 2006 NBA Finals in which the Heat won 4-2.

In a post-match press conference, Spoelstra congratulated the Bulls and said the series was about as competitive as he could imagine. He said his opponents had his and his team’s full respect.

Bulls head coach Tom Thibodeau responded to the loss saying the young team will learn from the loss and build on their season and make improvements for next season.

Miami and Dallas will renew their rivalry in the 2011 NBA Finals which begins next Wednesday (Australian time) in South Florida.

One Response to “Miami beats Bulls 83-80 in NBA thriller”