Maroons down Blues in tight finish 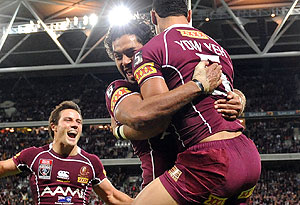 Queensland captain Darren Lockyer led from the front in his record-equalling 34th Origin match in Brisbane last night, getting the Maroons home 16-12 against a tough and persistent Blues pack.

Lockyer orchestrated the win in front of 52,144 home fans injecting himself at key moments throughout the game, most notably in the 73rd minute with a brilliant inside ball for Billy Slater to score the match-winning try.

It wasn’t a classic Origin game by any means but with two games to go, New South Wales did enough to suggest this rugby league series will be hard-fought.

There were some fiery exchanges throughout the match with tensions finally boiling over after full-time as Greg Bird and Corey Parker traded blows.

Blues coach Ricky Stuart praised his side in the post-match press conference saying he was proud of their effort.

“I’m disappointed with a couple of parts of the game but gee we were courageous. We defended nearly 15 extra sets of six – it’s amazing we were still in the game,” Stuart said.

Captain Paul Gallen said it was disappointing to lose the game but they now had something to build on.

In the other change rooms Queensland had plenty to be happy about.

The quartet of Slater, Thurston, Lockyer and man of the match Cameron Smith had all the answers.

Smith said after the game they had prepared for a tough match all week and were happy heading into the sheds at half-time leading 6-0.

He blamed fundamental errors in the second half for letting New South Wales back into the match.

The Blues started the second half with an error which led to a Jharal Yow Yeh try (pictured) in the 46th minute and it seemed like Queensland would run away with the match.

But Ricky Stuart’s side defended their line for five repeat sets eventually giving away a penalty.

Thurston missed his conversion from in front and suddenly NSW had confidence and momentum.

Two quick tries to Mitchell Pearce and Michael Jennings and the Blues were in front 12-10 and dreaming of an upset.

But this Queensland team hasn’t won five series in a row for no reason.

They showed why In the 75th minute with Slater scoring as the famous Queenslander chant got into full swing around Suncorp Stadium.