Life and Light – Lloyd Rees at the QAG 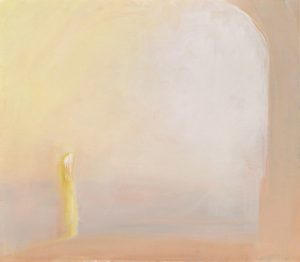 More than 100 pieces of Lloyd Rees’s artwork are being shown at the Queensland Art Gallery this month, celebrating the Brisbane-born artist’s long and successful career.

The Life and Light exhibition focuses on Rees’ early drawings of Brisbane and showcases his exploration of light in landscapes, street scenes and portraits.

One of his most prominent pieces on display, The Sunlit Tower (pictured), is an oil on canvas that Rees painted when he was 91.

This piece shows his growing interest in the abstraction of form and a focus on the source and effects of light on landscapes. Rees himself attributed the piece’s semi-abstract appearance to his failing eyesight, which forced him to paint from memory.

Among the artwork is Rees’ trusty paint palette, which he used for more than 40 years.

The display also includes art which Rees worked on in Italy, Spain and France.

The exhibition, which is centred on the recent gifts from Rees’ son and daughter-in-law, Alan and Jan, will run until 13 June 2011.