Glimpses into the life of an artist who died too young 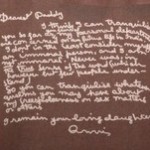 When painter Amrita Sher-Gil died in 1941 aged 28 she was already recognised as one of India’s most important artists, though she left behind only about 150 canvasses.

Born in Hungary to a Jewish opera-singer mother and an Indian Sikh father, her talent was nurtured early and at the age of 16 she trained at the Ecole des Beaux Arts in Paris. She was renowned for her beauty and for her lifestyle – being unconventional and having many lovers – but art was her great passion.

Her exceptional gift for painting focused on the female form, moving from a naturalistic style to more naive works – with particular influences being Paul Cezanne and Paul Gauguin. 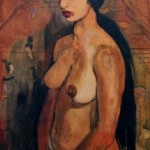 Sher-Gil's self-portrait as a Tahitian (not on display)

Later, living in India and revelling in her Indian heritage, she painted the Indian natives. Inspired by traditional Indian paintings such as the Ajanta frescoes, she developed a simplification of form.

The film Amrita Sher-Gil: A Family Album, is now on view in the Asian art section at the Queensland Art Gallery. The film, made by Navina Sundaram, Amrita’s niece, focuses firmly on Amrita’s paintings and is an expansion of the Sher-Gil archive. The Sher-Gil archive – an installation – is about Amrita’s family, Amrita’s place within that family and its influence on her art.

Flanking the area where Navina Sunderam’s film is screening, a few pieces from the Sher-Gil archive are displayed. Separated from the complete archive, the context isn’t clear. But the film is fascinating. It traces Amrita Sher-Gil’s path, displays her vibrant and deeply expressive paintings, and in readings from her diaries and letters, reveals her thoughts and opinions.

Amrita said she wanted to paint the poor Indians she saw, to “paint those silent images of infinite submission and patience, to depict their angular brown bodies strangely beautiful in their ugliness, to reproduce on canvas the impression their sad eyes created on me, to interpret them with a new technique, my own technique”.

Tragically, it can never be known where this calling would have taken her.