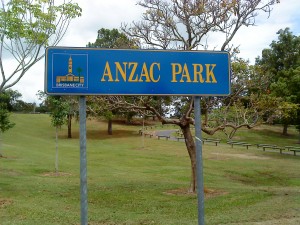 Opposition leader Shayne Sutton said Cr Newman was “willing to trample over the ashes of our fallen soldiers” by setting up a car park in the recreation area.

The car park is proposed for construction workers building the Northern Link tunnel from Toowong to Kelvin Grove.

Saying the plan was “temporary in nature” and designed to prevent congestion in suburban streets, Cr Newman said he was outraged at Cr Sutton’s comments.

He pointed to his record as an army officer and his family’s record of service. Cr Newman said he was still a major in the Reserve.

“Don’t wrap yourself up in the Australian flag ’til you’ve served in the defence force,” he said to Cr Sutton.

He said it sounded a lot like the Mayor was “taking ownership of any sense of Australian spirit”.

Mr MacPhail said there were other areas suitable for the car park plan that had been “overlooked”.

He said many were concerned at the consequences of having a car park next to a children’s play ground.

“ANZAC Park “is the best playground I’ve ever seen,” he said.

Mr MacPhail said he was worried that “increased traffic movement in this area will cause small children to become a statistic.”

“If the car park was built there, the playground would have to go,” he said.