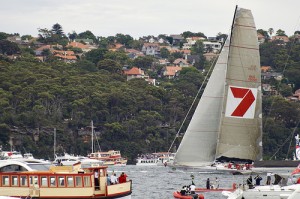 The race committee lodged a protest against Wild Oats XI (pictured left in Sydney Harbour) for breaking safety rules which say yachts must check in by radio as they approach Green Cape on the NSW-Victoria border.

The protest was dismissed by an international jury, but the jury’s report leaves questions unanswered. The safety rules were brought in after the disastrous 1998 race, when six racers died and 55 others had to be rescued.

The race’s Sailing Rule 44.1 a) says a boat must “assess whether its HF radio is operational and has a signal strength fit for the ensuing purpose” as it approaches Green Cape, and rule 44.2 says the boat must check in by radio.

The report also says Wild Oats XI’s “transmission could not always be heard until she reached Tasman Island”. Tasman Island is just outside Hobart, across Bass Strait from Green Cape.

Cruising Yacht Club chief Garry Linacre told Newsbytes Wild Oats XI did not use radio to stay in touch with race officials, but used satellite telephone to do so as it crossed Bass Strait.

In a statement on the race’s website, race committee chairman Commodore Tim Cox said: “Should a situation occur, we cannot organise search and rescue operations via telephones. I consider this a serious breach.”

Mr Linacre refused to answer questions put to him by Newsbytes asking how Wild Oats XI’s location when it checked in could be independently verified.

Commodore Cox also refused to answer questions as to why Wild Oats XI had not been recorded as “did not finish”, which is the only penalty allowed for in Rule 44.2 for failing to report by radio.