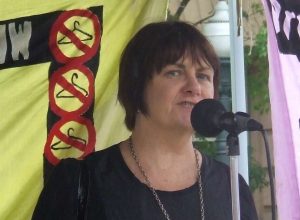 A union boss has made a scathing attack on Anna Bligh, calling the Queensland premier “disingenuos, deceitful and cruel”.

Secretary of the Queensland division of the National Tertiary Education Union, Margaret Lee (pictured left), was speaking at a weekend rally in Brisbane organised by the Pro-Choice Action Collective.

Ms Lee said the national council of the NTEU voted unanimously last week to condemn the prosecution of Leach. “It was unanimous, they stood up and cheered”, she said. The national council also directed general secretary Grahame McCullough to write to Anna Bligh urging her to drop the case.

Ms Lee said when she told the national council meeting she wanted to state publicly that the council regarded Ms Bligh’s conduct as disingenuous, deceitful and cruel, council members stood as one and applauded.

“Now we have another view of this as well, that comes from the fact that Anna Bligh used to work for the NTEU as an industrial officer so we feel doubly betrayed by this,” Ms Lee said.

“On a personal note, on behalf of my mother and my grandmother and all my aunts and all my granddaughters and all my cousins, I am saying to you, Anna Bligh, ‘pick on someone your own size’.”

Rally organiser Kathy Newnham said the Bligh government “has lined up with the anti-abortion movement with their lies and distractions”.

“This government has sold us the lie that the laws were a dead letter, that they would never be used,” she said.