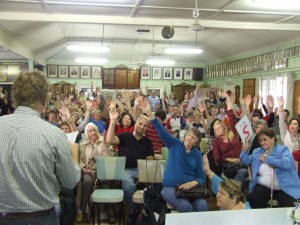 Angry Yeerongpilly residents have accused the State Government of lies and manipulation in their plan to resume 66 properties for a new rail line.

More than 150 people attended a protest meeting at Yeronga Bowls Club on Saturday to hear  Transport Minister Rachel Nolan promise to release information about the Government decision to resume homes at Yeerongpilly.

The Government plans to resume the homes to build an exit tunnel for the Cross-River Rail project.

Asked if she would provide the information the Government used to reach its decision that Yeerongpilly was the best site for the exit tunne, Ms Nolan said  “The answer…is yes –  I will endeavour to make available what information there is to you as a community”.

Ms Nolan said that other options proposed for the tunnel exit were less suitable, and that a possible alternative tunnel exit at the Clapham rail yards would involve resuming about 20 homes and finding 15 hecatres of land to move the rail yards somewhere else.

Katherine Isles, a member of a residents’ group who lives in Tees Sreet,  Yeerongpilly, questioned the good faith of the Government. 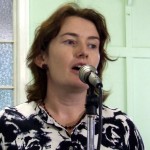 Ms Isles attacked “the lies that have been told to our residents, and the discrepancies between what the government and project team have said and what they have really meant”.

Professor of Urban and Regional Planning at Queensland University of Technology Phil Heywood  spoke about other examples of active community involvement in planning issues in Brisbane.

“Most of the successful community movements have occured when quite desirable and well-intentioned large public-interest issues have been put forward in options which bring particular difficulties and costs for small local communities, and this conflict has frequently ignited debates with good ultimate outcomes,” Professor Heywood said.

Previous examples included CART (Campaign Against Route Twenty), a campaign against a planned motorway through Brisbane’s north-western suburbs, and opposition to the original plans for Southbank after the 1988 Expo.

He said people needed to be ready to negotiate.   “You can’t have a good outcome through sloganeering…and demonising” he said.

The meeting unanimously passed a resolution to oppose the resumptions and to campaign against them.

One Response to “Yeerongpilly residents vow to fight rail plan”