Wharf development plan gets the nod 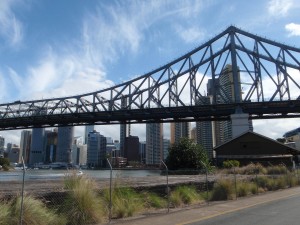 Site of the Howard Smith wharves development, looking towards the Story Bridge and the city

The motions were passed on party lines 14 votes to 9 for the Council to rezone the Howard Smith Wharves as a sub-precinct from parkland, opening it up for development.

“Thirteen thousand square metres is to be developed, 80 percent of which will be public space, 10 percent coffee shops  and 10 percent the 99-year lease for a small hotel,” Lord Mayor Campbell Newman said.

Opposition councillors objected to what they termed Lord Mayor Campbell Newman’s “underhand and sneaky tactics” in “stripping the public’s right to appeal” the proposed development plan for the precinct.

Cr Sutton said the Lord Mayor had “squirreled out of the chamber“ as he “doesn’t want to hear dissent and doesn’t have the intestinal fortitude to listen to this”.

Opposition councillors said they were not opposed to development of the neglected precinct but were concerned about the rezoning, the height, size and impact of the planned hotel, the nature of the public space and the preservation of three existing heritage buildings.

Cr Abrahams said the rezoning could become a precedent for the fate other inner city parklands.

The Opposition objected to the implication the term “code assessable” in the draft plan had for the public’s right to appeal.

Finance and Economic Development chairman Cr Adrian Schrinner said it was an exciting opportunity and he was disappointed at the Opposition’s lack of support. He said the site had the potential to become the next popular South Bank-type precinct. 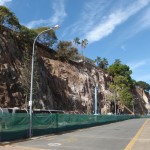 Stabilisation work at the wharves site

“Eighty percent of the site is to be public open space and this does not include the cliff face as Councillor Hinchliffe implied,” he said.

Cr Schrinner said Council had had long periods of public consultation and the plan needed to go to the State Government for their comment. The Council was still willing to listen to the public, he said.

Neighbourhood Planning chair Cr Amanda Cooper said the heritage elements would be preserved.  The area had huge potential and council’s plan was to “reactivate the derelict, neglected, unsafe area,” she said.

Along with a small group of protestors, Jane Ann Jushasz of the Wharves Action Group gathered at the site before the council meeting.

Earlier this year, Council withdrew a development application for the Howard Smith Wharves after a legal challenge led by Cr Hinchliffe and residents.