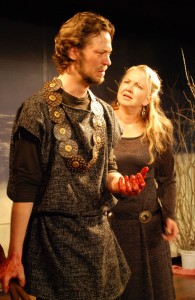 A bloody-handed Dan Lane as Macbeth with Rebecca Roebuck-Malone as Lady Macbeth.

Blood and butchery, swords and sorcery, tyranny and tragedy, murder and mayhem,  daggers and death are all promised in promotions for Nash Theatre’s production of Macbeth.  It’s a promise the cast are clearly driven to deliver as much as Lady Macbeth in her wanton desire for the throne.

Brenda White’s decision to direct the play in classic format, with no contemporary tweaking to detract from the epic Scottish tale, is surprisingly refreshing. The audience is given the opportunity, much like the cast, to simply focus on Shakespeare’s shortest and most bloody tragedy.

Sparsely furnished with a grey background, the stage barely changes, from the witches’ first encounter with Macbeth, to the court of King Duncan, the household of Macbeth and elsewhere. While the drab setting is not enticing, it does not distract from the play.

The three witches who prophesy Macbeth’s ascension to the throne, played by Gilly Graham, Imbi Ling and Gabrielle Burke, set the bar in the first scene at a height never quite attained again throughout the rest of the play. Covered in simple purple cloaks, the disturbing Weird Sisters’ heathenish nature is played to a tee. Leaving the audience comfortably amused, yet revolted by their maniacal laughter and obsession with the grotesque and inhumane. Gilly Graham is particularly outstanding as the first witch, reveling in paradoxes – “fair is foul, and foul is fair”, her hair a frizzy mass of unwashed tangles.

Dan Lane as Macbeth manages to grasp the complexities of Macbeth’s character and helps to simplify the Shakespearian prose through his overt physical and facial expressions.  He plunges so quickly into the strange reveries to which Macbeth so often succumbs that he gives the impression Macbeth is not a man changed by a sudden obsession, but  disturbed and mentally tormented. Lane’s Macbeth comes across as a weak man whose emotions are constantly at war, irrelevant of the circumstances.

The production includes talented portrayals of the noble Banquo (James Hudson), an exuberant and generous King Duncan (Nigel Munro-Wallis) and – one who cannot remained unmentioned – Paul Sherman as the thane Ross. Sherman is obviously an old hand and makes this role shine.

Rebecca Roebuck-Malone is outstanding as the manipulative Lady Macbeth. She and  Lane give a sexually tense take on the ambitious couple, yet still make sure the future king is most definitely not the one wearing the pants in this relationship. Roebuck-Malone gives Lady Macbeth a very regal tilt that makes one wonder if Lady Macbeth may just make a magnanimous queen. Her costume lets her down though, as she is dressed in the same purple cloak as the Weird Sisters, diminishing her stature.

Unusual casting is that of Gabrielle Burke as Banquo’s son, Fleance. Burke’s capable acting is far overwhelmed by her prettiness and every time she appears on stage the confusion of the audience is evident by many a furrowed brow.

Nash Theatre’s Macbeth has such common pitfalls of community theatre as restricted finances for props and costumes as well as basic lighting and stage,  but the enthusiasm and talent evident in the portrayals of many characters more than overshadow these drawbacks.