Koalas die while govt ‘spends too little’ on disease research 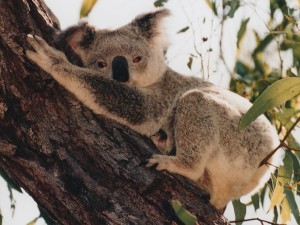 The State Government’s focus on land acquisition to protect koalas  ignores the major problem of disease, according to a Queensland koala research group.

“Already we have protected over eight hectares on Mount Gravatt-Capalaba Road under a $45.5 million program to purchase koala habitat,” she said.

Ms Jones suddenly announced  a further $400,000 in funding for koala disease research this week. Her department has already committed $43 million for land acquisitions

But Professor McAlpine said money towards research into koala diseases such as chlamydia and Koala RetroVirus (KRV) was the highest priority.

“We need to know how to control these diseases, so the priority in funding is towards research,” he said.

He said last week KRN applied for funding for koala disease research in March but had not  received any response from the State Government.

But when NewsBytes contacted the Department of Climate Change and Sustainability a spokesperson, who did not want to be named, said the department was looking at the application. But he could not say why there had been no contact with KRN because he “didn’t have that level of information’”.

KRN,  made up of researchers from four Queensland universities, industry and interest groups was created early this year “to stop the imminent extinction of koalas in South-East Queensland”.

Moreton Bay Koala Rescue Inc said on its website  “the pitiful response of the State government to the koala crisis is partly because they assume that protection of at least some koala habitat will be sufficient to save the species”.

“The combined amount spent by the government on koala diseases is less than $50,000 a year,” he said.

“We have made recommendations particularly to the Queensland government, because much more money needs to be spent to investigate diseases in koalas if we are to have any hope of addressing this significant threat.”

Primary surveys conducted in Narangba and Brendale by the Australian Wildlife Hospital (AWF) found  about half  of female koalas have detectable reproductive tract disease,  while one in three    males and females “are so sick that admission to wildlife hospitals or euthanasia is required.”