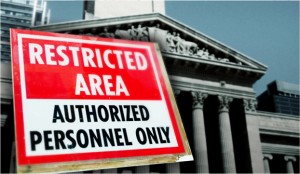 Some Brisbane City Council staff seem to have missed the point of legislation that gives citizens the right to access information it holds.

During the past several months Newbytes journalists, reporting the news to inform the public, have routinely been fobbed off, denied information and subjected to intimidation.

Newsbytes acknowledges the BCC media office receives hundreds of requests for information and comment every month. And some BCC media staff have been helpful in providing information.

But the number of incidents where Newsbytes phone calls and emails go unanswered for days at a time is, at the very least, poor service.

Some examples make the point.

A Newsbytes journalist contacted the BCC media unit on 27 July with a couple of specific questions about the BCC’s Burnett Lane project. The requests went unanswered for almost a week. Then the journalist asked to be put in contact with one of the artists but the request was denied.

The same journalist was rebuked by BCC media staff when she went to their office to chase up the information. Ironically, the student, an accomplished feature writer, was trying to write a  human interest piece reflecting well on a Council achievement.  Why such an inquiry should have been met with resistance and lack of interest cannot be imagined.

Another Newsbytes journalist was denied information when she asked for a comment about the small attendance numbers at a BCC organised event for Black History Month. One of the participants told Newsbytes the BCC had failed to adequately promote the event which resulted in audiences of just eight or nine people.

The journalist asked the BCC event organiser Nancy Bamager to comment on the criticism. Bamager said she would have to speak to her supervisor and would get back to the journalist. But after a few days and no reply, the journalist contacted BCC media again and left a message for Ms Bamager. She did not return the call.

In a disturbing and blatant act of intimidation a BCC councillor’s secretary called security when Newsbytes journalist John Corlett went to the councillor’s office seeking comment about a community protest in connection to the Airport Link Road.

Corlett had made several attempts to contact the councillor and when his phone calls and emails went unanswered he went to the councillor’s office.

But in terms of BCC’s media officers’ ignorance of democratic rights, the case of a Newsbytes journalist being told to make an application under Right to Information laws, takes the cake.

The journalist asked for basic details about  a council land resumption in Upper Kedron.

The matter came before the full Council chamber last month where it was revealed the BCC was resuming the land for “environmental” reasons and the land owners had made several objections.

The journalist, quite rightly, asked the BCC media unit to provide her with access to the Council file in order to establish what the “environmental” reasons were and what objections had been made.

A day after her request, the journalist went into the BCC office to clarify her request.

Again, BCC media staff rebuked the journalist for going to their offices in person.

She said she felt intimidated and embarrassed.

After several days of waiting for a response, the journalist was brusquely told to make a Right to Information application.

In a conversation with this writer a BCC media office spokesman, who does not want to be named, said he agreed that an application under Right to Information law was “overkill” in this case.

In response to the incidents, a BCC spokesman said journalists who requested information were treated with respect and information was provided to mostly meet news deadlines.

He said all large organisations had protocols for dealing with media and BCC was no different.

“Council has a longstanding policy that only approved spokespeople may comment on behalf of BCC,” the anonymous spokesman said.

“Council does not release files to members of the general public due to privacy and commercial in confidence issues without them being checked by the Right to Information and Privacy Officer. This applies to working journalists also.”

It’s almost  two decades since the then Queensland Attorney-General Dean Wells told the Parliament a new Bill giving citizens access to government-held information would replace a “culture of secrecy” with a “culture of openness”.

But the new Freedom of Information Act 1992 failed to deliver on the government’s promises of access to information and it was reviewed in 2008.

Prominent barrister and journalist Dr David Solomon and a panel appointed by the Bligh Government made 141 recommendations for changes to how citizens’ access information held by governments, including local government, which is the closest to the people.

Ms Bligh told the parliament on 19 May 2009:  “The objects and operational clauses of the bill emphasise that information is to be released administratively unless there is a good reason not to, with applications under the legislation to only be an avenue of last resort.”

One of the central planks of the new Right to Information Act 2009 which came into effect more than a year ago was the “push” model.

The Office of Premier and Cabinet, in its response to the Solomon Review, described the push model as being “fundamental to open and participatory government”.

“Information is provided as a matter of course” unless there are good reasons for it to be withheld, the Government said. New standards in public service practices and culture would mean “…providing information to Queenslanders is recognised as a legitimate and core aspect of every public servant’s day-to-day work”.

Brisbane City Council employees need to review their access to information policies and amend their practice and culture so that they do a better job of meeting the legislature’s objectives.

3 Responses to “Commentary: Council pushes right not to know”