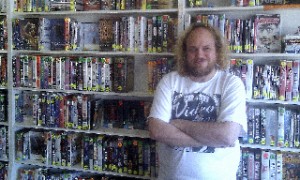 West End landmark Trash Video closes its doors for the last time this weekend, but owner and fan of exploitation movies Andrew Leavold has plenty of things to do after locking up on Sunday night. For a start, he’ll be making his own movies.

Leavold (pictured) says he opened Trash Video in 1995 “because I was a weird little child obsessed with the idea of opening a video store with the kinds of films I liked, from old war films to Vincent Price to Carry On films”.

He didn’t get to watch much TV growing up in the Middle East, until 1979 when the nine-year-old saw Betamax arrive and video rental stores sprung up.

“I got access to all the stuff I’d been denied; it was like a bushfire going off in my head”. Licenced movies and TV shows were incredibly expensive – Leavold remembers seeing movies being sold for 100 pounds in the UK – so there was a huge incentive to pirate.

Leavold was watching 10th- or 12th-generation copies of films recorded by pointing old video cameras at the screen. He gives as an example “how I first saw The Exorcist after it had been recorded from a stuffed TV, so the movie had a luminescent green quality”.

Leavold says he has a missionary zeal to convert people to the films he loves, and he knows exactly what film he’d show people if he had the chance: If Footmen Tire You, What Will Horses Do?. It’s an “Altar-core” film, a gore film made by and for born-again Christians, made by Ron Ormond, who became a Christian after surviving a plane crash in the late sixties. It’s pure Christian propaganda in the form of an exploitation film, combining two of Leavold’s favourite genres.  “I’m fascinated with exploitation films,” he says, “especially when they’re made by people you wouldn’t expect to be au fait with the techniques”.

Leavold says he prefers the “accidentally weird” to the forced eccentricity of many of today’s films; he loves “films made straight-faced that turn out to be fucking inadvertent masterpieces”. He prefers popular commercial cinema to films that arthouse cinemas often show, and says “I live for the the jarring moments when a film removed from its time, its place and its culture forces its perspective on me”.

He says there aren’t enough of those moments in Western cinema and he now pays attention to Far Eastern, Mexican and Turkish movies from the mid sixties to the early eighties. He thinks that time was a golden age of movies; he especially enjoys the music, the scripts and acting which are less self-conscious than many later films, and the style of adult pulp which was common then.

Leavold has two more films on the way, both arising from a project where he went to the Philippines looking for information about Weng Weng, a two-foot-nine-inch high Philippine actor who starred in James Bond spoofs including For Your Height Only.

One film from this project, Machete Maidens, is in the hands of another producer converting it to a form that the ABC will accept; Leavold says the Corporation wants something like the 2008 documentary on “Ozploitation” films, Not Quite Hollywood. But Leavolds is cutting another version of the story into his own vision, titled The Search for Weng Weng.

Leavold thinks the style of films wanted by official funding bodies can sometimes be limiting, because the self-consciously Australian films they often favour don’t have a big audience overseas. He wants his films to be seen by as many people as possible, meaning his style of film-making is difficult to fit with the official vision.

He says the way around this is to find a producer who knows how to make deals outside the official channels, such as Australian Antony Ginnane.

Leavold cites the example of the Spierig brothers, makers of the Queensland film Undead, who rejected the “indie-comedy” that government funding organisations wanted at the time. By shooting their movie on Super-16 film for a budet of $50,000 they were able to get enough money from distributors to turn it into a version suitable for cinemas. In the same spirit, Leavold is looking for money from the Philippines to finish The search for Weng Weng.

But for now, Leavold is busy winding down Trash Video. The final closing down sale continues until 7pm this Sunday August 29 at the store at 73 Vulture St, West End, and any movies left over will be sold by mail order. Leavold will convert the shop into a part-time cinema until the lease runs out next year, and will keep   presenting cult films on Brisbane’s community TV station Bris-31 and at George Street’s Tribal Theatre.

For information on Andrew Leavold’s projects, email [email protected] and ask to be placed on his mailing list.