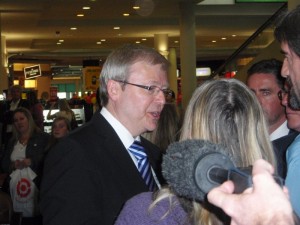 Mr Rudd (pictured) chatted and drank coffee with shoppers alongside Bonner MP Kerry Rea, who won the seat at the last election and now holds it with a less than 5 percent margin.

The appearance coincided with the Coalition campaign launch, also in Brisbane, and came after Mr Rudd met Prime Minister Julia Gillard yesterday for the first time since she took over the leadership in June.

It was Mr Rudd’s first appearance since agreeing this week to campaign on the national stage after polls showed strong gains to the Liberal Party’s primary vote.

Mr Rudd spoke briefly at the end of his visit, but refused to take questions from the assembled media scrum, who were contacted only half an hour before the event.