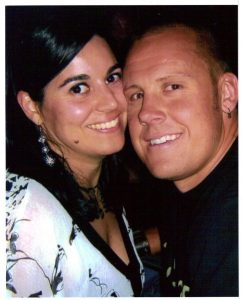 Like silent sentinels, accident-related roadside memorials have altered the physical landscape of road verges and stand as poignant markers of lives lost suddenly in traumatic events.

One such memorial lies alongside the Bruce Highway on a notorious stretch of single lane road near Coles Creek, south of Gympie – a tribute to the memory of Cory Whitmore, 29, his partner Rachel Purdy, 31, (pictured) and their unborn child.

Along with a truck driver, the three died tragically on 4th September, 2008, in a horrific accident involving four vehicles in dreadful weather.

Cory was a small business owner in Noosaville and a keen amateur boxer. By all accounts, both he and Rachel were fun-loving, sporty, family-oriented people and vibrant members of their community who were looking forward to the birth of their baby.

Understandably devastated, the families who were left behind set up a memorial site at the accident scene, marked by two wooden crosses and a sign in a neatly demarcated area filled with white stones.

“It is a sacred space where we can go and pay our respects and talk to them,” says Kathy Whitmore, Cory’s mother.

“This is where they died. We decorate the space more, replace faded artificial flowers with brighter ones and take fresh flowers. It is marked out with pebbles, and we wanted to let people know what a bad stretch of road this is.” 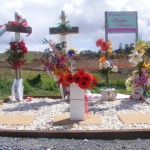 The memorial to Rachel and Cory

Recognising the significance of these memorials, the Queensland Department of Transport and Main Roads (TMR) has formalised policy and guidelines around safety issues for state-controlled roads. Although a permit is not needed, completion of an information form is required.

Nationwide, the different state and regional council roads departments have their own policies on roadside memorials. Policy reviews are ongoing and subject to much heated debate.

Not a new phenomenon, these statements of grief are the focus of researchers in many disciplines.

The manager of Road Trauma Support Services Victoria (RTSSV), Mr John Downes, says that for those who erect them, the memorials have an important, specific value and constitute a symbolic space.

“A memorial site establishes a place where grieving family and friends can visit and gather, where they remember and honour their loved one,” he says. “It is a place of tribute, a sacred space, a marker for themselves and for others.

“They mark the complicated nature of the struggle to make sense of tragic circumstances and find meaning where often there is none.”

He says the sites reflect a convergence of the public and the private, the secular and the sacred.

“The increasing presence of roadside memorials points to a cultural shift in the way we mourn,” Mr Downes says, adding that the memorials may also be contentious and confronting in that they infringe upon public space.

RTSSV board member and Uniting Church minister Andy Calder, a survivor of a serious road incident in 1986, heads a project to establish a permanent memorial in Victoria. This memorial will acknowledge lives lost and those impacted by road crashes.

University of New England historian, Professor Jennifer Clark, who has written extensively on roadside memorials and associated policies nationwide, dates accident-related memorials in Australia to about 1989.

“There have been some interesting changes; you are starting to get memorials erected now which commemorate deaths that occurred some time ago. This is a significant trend with people wanting to participate in this process [of roadside mourning].

“The memorials have developed in terms of sophistication; they are now more complex and involved with more elements to them.”

Professor Clark (pictured left) has found differences in memorials worldwide. “In Britain, crosses are rare and you get many wreaths and floral shapes, whereas in Australia, more than 80 percent of roadside memorials have crosses attached to them,” she says.

“In South America, the people are largely Catholic and the sites are all marked with crosses, shrines and lots of iconography, but in America, it is illegal to mix church and state and crosses are removed. There, the roadside is not a place for religious symbols.”

Pondering her own questions as to whether the cross in Australia is used as a Christian symbol, making a spiritual statement, or as a symbol of death, Professor Clark says practising Christians “would often put a Christian statement on top of the memorial, such as another smaller cross or hang a rosary”.

Following a cemetery visit while in Dublin recently, Professor Clark says she noticed increased grave adornment suggestive of a shift in the strict rules regulating grave decoration. She reflects this is perhaps an effort to give mourners more freedom to express their grief or a push to open up cemeteries.

Now part of a fraternity no-one would ever wish to join, Kathy Whitmore voices her grief and says after losing her son “life is forever changed,” while adding positively that life must go on as she remains a wife and mother.

She bravely shares her experience of road trauma as a presenter in the “Safe Driving Awareness Campaign”. Saying she never thought she could do public speaking, she draws strength from other participants and says she is encouraged by the feedback she receives.

“A rev-head came up to me afterwards and said he was a dreadful driver but just coming along to this presentation made him realise he has to change.”

A partnership between police, Maroochydore RSL and volunteers, the campaign was started in December 2006 in response to a triple fatality accident at Mountain Creek. The presentation is co-ordinated by Senior Constable Garry Church of the Forensic Crash Unit.

“We want to let people see how victims of road trauma are affected after losing someone,” says Constable Church.

With the apt slogan “You never know when your road will end”, the Sunshine Coast-based production runs under the auspices of Road Trauma Services Queensland, and touchingly, has “You are my Angel” written by Cory’s then 13-year-old niece Taylor Moss, as the theme song.

With funding recently acquired from Lend Lease, the campaign can now deliver their message further afield, and will come to Brisbane in September 2010.

Perhaps due to issues of confidentiality, a registry of Queensland road memorials was not available but a web search found a site, Aussie Road Memorials, billed as a “state-based catalogue of roadside memorials”.

The manager of the site was motivated to set up the web presence “to create a permanent record for Australians,” having some experience of death in his line of work and having seen memorials on repeated road journeys. These things led him “to ponder the missed opportunities of potential human achievement these premature deaths represent”, Mr Jones says. (He asked that his first name not be used.) 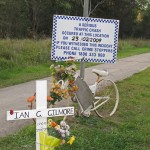 A roadside tribute appeals for information

Mr Jones has researched the topic extensively and mentions an occasion where a memorial erected outside a home in a suburban street created some tension. The homeowner was unrelated to the victim and although sympathetic to the family, wanted the memorial removed “as it was disturbing for them in terms of the memory of the incident as well as the impact on their home value.”

One of the memorials on the site commemorates a beloved dog killed on a highway.

Some are garlanded with faded flowers, ribbons and glittering tinsel, several littered with beer cans, inscribed R.I.P./R.I.F.P., or hung with photographs, father’s day wishes encased in plastic and other deeply personal mementos.

A “firey” involved in accident response in the region spoke of the tragic death of three young men commemorated in a memorial at the Mckinnon road intersection. Community heartbreak was compounded when the local tow truck driver tragically died a couple of hundred metres away only hours later, while towing the mangled wreck.

Apart from family, friends and those injured, a memorial site also recalls huge community involvement in the form of police, emergency response personnel and allied services as well as the press and judiciary.

Closer to home at Nudgee, a white cross commemorating a cyclist killed in a hit and run incident fronts a decorated bicycle, topped by a large crime stoppers sign requesting information on the incident.

For her part, Kathy Whitmore lives through the torment and anguish of the ongoing inquest into the accident but finds comfort and pride in the fact that sharing her experience may help others.

“The site is important to us,” she says, mentioning that sometimes they notice extra flowers at the site that have been added by unknown people.

“It is amazing when you have lost somebody, you notice the memorials more. Straight away, your heart goes out to the bereaved as you think oh no! I know what they are going through.”

Whatever their trimmings, controversies, implied meanings and interpretation, roadside monuments are largely freed of the regimented confines of a traditional cemetery, and represent tangible expressions of heartbreak, signifying stories of lives lived and lost, frozen in time and memory.