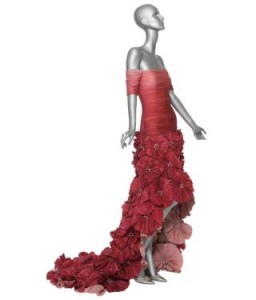 Valentino Retrospective Past/Present/Future was unveiled in Brisbane’s Gallery of Modern Art last weekend in the exhibit’s first display outside Paris.

It follows Valentino Garavini and the fashion powerhouse over the decades since 1959.

“The persistence of the Queensland Art Gallery and Art Australia made it such that we couldn’t refuse,” Golbin told Brisbane media.

Ms Golbin said the exhibit was a nod of thanks to Valentino that acknowledged the legacy he’d left behind.

Valentino is famous as the brand Jackie Kennedy wore almost exclusively. Her wedding dress is one of those featured and is one of the most popular at the Brisbane showcase.

It exudes an understated glamour that is synonymous with the brand. The free-standing and exposed designs are within touching distance, which allow s the first-class couture to speak for itself.

The displays are not presented in chronological order; rather the outfits are displayed by theme – cocktail, floral, black and Valentino’s signature red. The earliest pieces are easily dated, but designs from the ’80s and ’90s would not have been out of place in his 2008 collection.

A standout cocktail ensemble from 1966 is the zebra-striped crop top and matching trousers. It’s a world away from the sleek, sequined evening gowns of the 80s. A tan gown from 1988 is entirely covered in sequin flowers, and mirrors the similarly designed 2008 gown.

The exhibit has a display that shows the evolution of the Valentino brand, which is as fascinating as the dresses. Patrons can see the dresses in the first room and the original decades-old magazine shoots in the next.

The most popular dresses with this afternoon crowd were the most famous. A small crowd gathered around the unusual lace dress in which Jackie Kennedy was married. An even larger group wandered past the vintage black and white number Julia Roberts wore when she picked up Best Actress Oscar in 2001.

Since Valentino retired in 2008, new creative directors Maria Grazia Chiuri and Pier Paolo Picciolli have given the Valentino brand a rock and roll edge that is absent from the sleekness and glamour of the old collections.

Their designs still work well together with Valentino’s old designs, and continue on the tradition of creating beautiful, unique ball gowns for the famous.

Valentino Retrospective Past/Present/Future is a world class exhibit that pays worthy attention to a man who shaped haute couture fashion over five decades.

The Valentino exhibit is a nod to Brisbane’s growing reputation as a centre for fashion and art. GoMa’s sister gallery, The Queensland Museum of Art was the only Australian venue for the hugely successful Hats: An Anthology by Steven Jones earlier this year. It hotly follows GoMa’s crowd pulling Ron Muick exhibit.