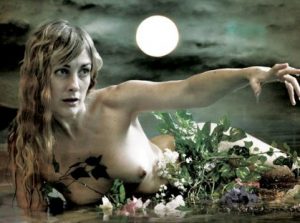 Reading between the lines of Shakespeare’s Hamlet there is little doubt that the prince of Denmark had his way with the daughter of the king’s minister, Polonius – or at least tried to.

Steven Berkoff speculates about the possibilities in this clever parallelquel to Hamlet, reminiscent of Tom Stoppard’s Rosencrantz and Guildenstern are Dead.

The lovelorn couple communicate via letters, penning their thoughts which are whisked away like emails. (Imogen Gilfedder-Cooney supplies suitable sound effects on the violin.)

The acting, in this challenging two-hander, is invariably of a high quality. Mary Eggleston (pictured) convincingly portrays Opehlia’s vulnerability and secret yearnings, with kaleidoscopic mood changes.

Veteran actor Eugene Gilfedder is a mature Hamlet (after all, he played the prince’s father and uncle the last time he acted in Hamlet), but this in no sense is a distraction. Indeed, he presents as rather a juvenile love-sick fool. (On this reading it is easy to see why Hamlet was passed over for the crown when his father died unexpectedly.) Gilfedder acts with passion and a crazed frenzy.

Berkoff’s blank verse is effective in communicating the lovers’ passion in poetic cadences. Berkoff is steeped in Shakespeare’s words, having put together and acted in Shakespeare’s Villains, which toured Australia five years ago. Yet, even good dramatists like Berkoff pale in the glow of the Bard’s brilliance — and this is never more clear than when occasional snatches of Shakespeare interpolate – it would be a little like including some passages by Mozart in a Salieri concerto.

Sequels, prequels, paraquels are rather a good idea, for in addition to their own artistic merit, they give us cause to reflect on the classic they are embellishing.

In this particular parallel universe, Hamlet apologises for his conduct during the “get thee to a nunnery” exchange in Shakespeare’s play. Ophelia, meanwhile, gives vent to her resentment at the control and interference of her father.

She also shows her anger and regret that Hamlet is probably destined to marry a woman of royal blood, and hence that their affair is doomed – a conviction (in Shakespeare’s play) held by her father and brother, who warn her off Hamlet. (It is sadly ironic that Queen Gertrude had in fact expected Ophelia to wed her son – “I hoped thou shouldst have been my Hamlet’s wife; I thought thy bride-bed to have deck’d, sweet maid, and not have strew’d thy grave.”)

Berkoff explores, too briefly, the agony Ophelia feels at the fatal stabbing of her father by her lover, suggesting this excruciating cognitive dissonance as the source of her madness. Her anguish evokes Juliet’s torment when Romeo slays a member of her family – “beautiful tyrant! fiend angelical! dove-feather’d raven! wolvish-ravening lamb!” (Juliet, more grounded than Ophelia, resolves the tension by siding with her husband.)

But while thought-provoking, I find it difficult to accept that Hamlet would have been feverishly writing letters to Ophelia in the midst of all the other things he was up to after the Ghost’s revelation. Moreover, Shakespeare’s Hamlet betrays little evidence that he gave poor Ophelia much thought at all.

Credit must go to director Brenna Lee-Cooney for a disciplined production. Freddy Komp’s visuals (stills and video projected onto a small screen above the stage) add to the surreal and dream-like effect, and the soundscape (adapted from George Crumb’s “Black Angels”) is excellent in its eeriness and performance.

The Secret Love Life of Ophelia is playing at the Metro Arts Theatre Studio, Edward Street, Brisbane, until 15th August.

This review is also published in Stagediary.com