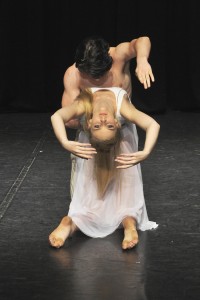 The young faces on stage are the only indication they are students, for their talent and professionalism make this an outstanding production.

As lines from Shakespeare’s play opened the ballet, artistic director Martyn Fleming tricked the audience into thinking this was a regular ballet.

Instead, a motorbike roars on stage and modern rock music blares through the speakers. It’s obvious that Fleming is a very modern choreographer.

His work is spotted with references to pop culture and modern musicals like Baz Lurhman’s Moulin Rouge, and even uses his 1998 song “Sunscreen”.

He has choreographed moves that only a ballerina could do, but only a contemporary dancer would dream of, and does it all to rock music and tango beats.

He still intersperses it with classical music and moves, especially the pas de deux scenes between Romeo and Juliet.

Unfortunately, many of those scenes use simple choreography that lets down the dancers.

The wedding scene that could and should have been the strongest duet of the ballet took second place among the other impressive duets.

Lord and Lady Capulet, danced by Zachary Horvat and Anita Brittingham, are the strongest duo, but Jacob Robinson as Romeo is the strongest male lead.

He and Anita Brittingham shine through the choreography and cement themselves as names to watch.

Saraphina Irvin as Juliet brings grace and innocence to the part that seems under-choreographed for a talented young dancer.

The entire company work well together, and are at their best when they’re all on stage.

Dancers from this production deserve roles in professional companies in the near future.

Fleming should be happy with the professionalism of the production and the seamlessness between contemporary and traditional ballet.

He has created an edgy, entertaining piece that deserves more than its one night staging.

Photo: Jacob Robinson as Romeo and Saraphina Irvin as Juliet