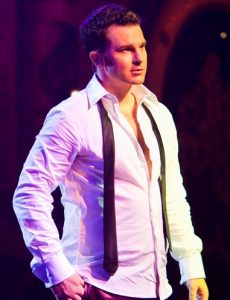 The promotional material promised a night of classic and modern Broadway songs accompanied by a dazzling orchestra. Finely groomed and in a shiny three-piece suit, David Campbell promises “an election
free zone” and “no swingin’… until later.”

With the coloured lights and overworked smoke machine it’s easy to imagine you are knocking heads in a mosh pit.

That is until Campbell dons a sequin jacket leaning suggestively on the piano to pay homage to Peter Allen and sets the crowd into a frenzy.

He treated the audience at QPAC to a collection of songs from his new album On Broadway.

These included work from the Phantom of the Opera sequel, Love Never Dies, and a song from the new musical based on the movie, Catch Me If You Can.

Campbell uses breaks between songs to casually give the audience background to the songs he sings and a well-deserved swig from a plastic bottle of water.

And these comedic- think Bob Hope- explanations ensure his performance is accessible to people unfamiliar to Broadway.

The audience, with their greying hair and $60 and upwards tickets, afforded Campbell and his jokes about Lady Gaga and Avatar with the generous response one gives a popular uncle and his corny jokes.

A committed fan base held onto Campbell’s every word and applauded his quips, whistling and glimpses into his personal life.

A recent father, Campbell closed the first half with a passionate performance of Soliloquy from Rodgers and Hammerstein’s Carousel. “My boy Bill I will see that he is named after me, I will. My boy, Bill! He’ll be tall and tough as a tree, will Bill!”

While Campbell revealed influences from Rodgers and Hammerstein, Stephen Sondheim and Frank Sinatra, there was no mention of his father, and Australian rock icon, Jimmy Barnes.

With the solid orchestra and intermission behind him, Campbell played with a foot pedal recording device and his vocal diversity to create real-time harmonies of punters at the race track.

He finished the one-night show with an Al Jolson medley and bowed out to a thunderous standing ovation.