No dodgem Latham as Gillard moves forward into sideshow

Mr Latham quickly made it clear his words were not in welcome of his former friend and ally, immediately questioning her about an alleged complaint about him from the Labor Party.

“Can I just ask you about why the Labor Party has made a complaint about me working for Channel Nine?” Mr Latham said.

Ms Gillard assured Mr Latham she was not aware of any complaint and said his career was “a matter for him”.

Mr Latham said if she had agreed to an interview with him then a complaint would be unnecessary and suggested she should be complaining about the prime minister she replaced in June, Kevin Rudd.

“If you want to make a complaint you should really make them about Rudd, he’s the one who is sabotaging your campaign,” Mr Latham said.

“So have a dig at him instead of having a dig at someone who’s trying to do a job.”

Ms Gillard laughed Mr Latham’s comments off and parted with “Nice to see you Mark and I hope you enjoy your life as a journalist now.”

“Good luck with that,” she said.

Mr Latham told the Prime Minister she should tell her people to “loosen up”.

The uncomfortable confrontation followed an intense meeting between Julia Gillard and Kevin Rudd earlier in the day to discuss campaigning. 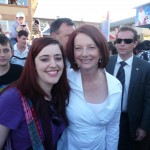 According to the latest Newspoll of Queensland voters the gap is widening, with Labor on 38 to the Coalition’s 48.

Criticising Mr Abbott’s meeting with Mr Stephen, Minister for Foreign Affairs Stephen Smith said the Coalition’s “political stunt” was inappropriate because Mr Abbott had no authority to discuss this subject while not in office.