Lucas under fire in Parliament over health woes 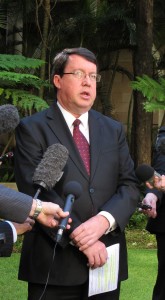 The State Government has been forced to defend its record on health in the face of a barrage of questions from Liberal National Party shadow ministers and independents.

More than half of Wednesday’s question time in Parliament was spent on the topic of health, with Deputy Premier and Minister for Health Paul Lucas (pictured) fielding questions on topics ranging from Queensland Health’s on-going payroll problems to cancer rates in rural areas.

Shadow Minister for Health Mark McArdle opened the attack, referring Mr Lucas to the case of an employee of Queensland Health who was owed backpay and could not be told when it would arrive.

He said Labor had mismanaged the payroll system and asked Mr Lucas to reveal how many other health workers were not receiving backpay.

Member for Aspley Tracy Davis followed with a question about the failure of procedures at the Royal Children’s Hospital.

She said a steriliser in the Oral Health Department of the hospital had not been validated for more than two years, despite the fact sterilising equipment is supposed to be checked every 12 months.

Fellow LNP member Jarrod Bleijie joined in and detailed the story of a 73-year-old constituent in his electorate of Kawana who had to wait 25 days for an operation on a broken ankle.

“Can the minister explain why, after bragging in the place on so many occasions about how wonderful the Bligh government is, people like 73-year-old Mrs Levets are forced to wait 25 days and be transferred between three hospitals for a broken ankle?” he asked.

Mr Lucas defended the Government’s management of health, and said many of the issues brought up by the ministers had been resolved or were being addressed on a state and federal level.

He said this year the Bligh government had increased spending on health by 10 percent to a record $9.99 billion, and had posted records for surgery and low long waiting lists.

“Health at a state level is the single biggest item of budgetary expenditure, and the Bligh and Gillard governments have a clear vision for the future,” he said.

Mr Lucas pointed to this week’s Australian Healthcare and Hospitals Association report card on the federal health plans of both parties at a national level.

“The report card has carved in stone what has been clear for many years with both the Liberals and the Nationals when it comes to health: they have no policies,” he said.