How books saved an author’s life 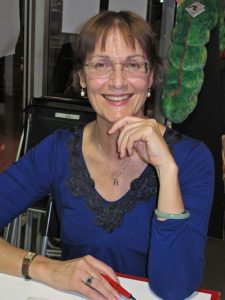 “Sex won’t save you, but a good story – yes!” said a smiling Brenda Walker, award-winning author and academic.

She appeared with fellow literary scholars Stuart Glover and David Carter in a panel discussion on “The Art of Reading” at Avid Reader in West End on Tuesday night.

In a discussion chaired by newly published Brisbane author Krissy Kneen, the three discussed the whys and wherefores of reading – but were invariably drawn back to Dr Walker’s latest book Reading by Moonlight, which has books and reading at its core.

Cocooned in the intimate bookshop against the cold and wet of a Brisbane downpour, the audience was held spell-bound as Dr Walker (pictured) read excerpts from this, her fifth book, subtitled “How books saved a life”.

A Winthrop professor at the University of Western Australia, Dr Walker’s novel was borne out of her personal experience of overcoming breast cancer.

Having written previously about war in The Wing of Night, her cancer diagnosis found her facing a different type of war. Her love of books and reading became part of her defence and survival strategy.

She took advice from her mother, novelist Shirley Walker, who encouraged her to be “bare and honest”. Dr Walker acknowledged she found it difficult and confronting to write so personally.

The result is a touching, honest, intimate story in which she shares her journey, her fears and the support of family and friends. The reader learns of the succour and comfort she received from books she had read, and which books she chose to accompany her on her voyage through illness to health.

The reader is drawn into her story with the use of the collective “we” as the writer details the different stages of her treatment, through surgery, chemotherapy, radiation and reconstruction to survival.

She uses striking, concise descriptions and imagery to detail her experiences which are woven through with the words of authors who inspired and moved her.

For her, the most significant of the books she included is Malone Dies, from Samuel Beckett’s trilogy, which “became one of the books of my life,” she wrote. “It steadies me.” She paid homage to the dying Malone and acknowledged his view of moonlight from his hospital bed in the title of the book.

Quoting Jane Smiley who likened reading to a kind of guided meditation, Dr Walker said she used reading to instil “a sense of calm, a judicious meditativeness and a way of reaching beyond ourselves”.

She tempered this when she said there were times during her illness when she could not read and her son would plug her iPod in with U2’s “It’s a beautiful day”, or a song from Coldplay.

“Sometimes, you are so depleted you just have to find out what is happening to Brad and Angelina!” she laughed.

Tall and elegant, Dr Walker added, “Think of me as a woman who has put a few books to the test, the type of compulsive reader who reads anything, including the newspaper clippings in drawers in hotel rooms.”

Highlighting the power of books, she wrote, “And in a fundamental sense, we readers are all explorers, until that unimaginable point where all thoughts finish. It isn’t distant loves who speak to us in our ordinary wildernesses – the highway, the office, the hospital room – the disembodied voices that are our invisible companions rise, sometimes lovingly, from the pages of our books.”