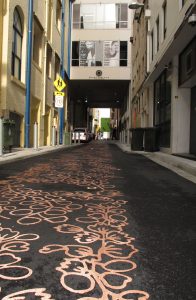 For a three-month trial period, the Albert Street access road is restricted to pedestrian traffic between 11am and 2pm on weekdays.

The council provides plastic tables, chairs and umbrellas set on artificial grass to help create a lively street atmosphere. There is music, the Record and CD Exchange displays wares, books are traded and a corner coffee cart serves to encourage patronage of the space.

Take a journey up the revamped lane and discover creative designs and interesting finds among garbage bins, skips, delivery vehicles and (police) parking!

This intriguing, cinnamon-coloured plant-motif street print gradually morphs into a luminescent lime-green as one nears George Street and pays homage to the work of lane namesake, surveyor James Charles Burnett.

Woods says: “This work addresses what is essentially a chronology of the landscape and the role of the surveyor. Through the organic process of walking, climbing, boating, swimming, the surveyor works from the concrete to the abstract, the map. It is a journey from the organic to the abstract, from an organic forest floor pattern to a more geometric, linear network, from an earthy brown to a more artificial lime green.”

Beneath a silhouette, stencilled plastic and painted scripts enliven a plastered wall and cover a roll-up garage door.

According to the Moreton Bay Courier of 22 July, 1854, Burnett died “debilitated” at the age of 39, the result of “an enthusiastic and almost reckless devotion to the trying duties of his profession”.

Next to the Chifley Hotel drop-off zone hangs the massive artwork “The Green Wall” by Brisbane artist Simon Suckling. 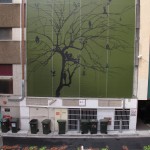 The Green Wall by Simon Suckling

A council spokesperson speaking on the artist’s behalf said the work “represents the growth of the laneway as it blossoms into life”.

Two birds fly in, one carrying a wine bottle while the second pours tea for a female figure seated at the top of the tree.

Opposite The Green Wall is a narrow, industrial stairway marked with a small sign declaring CITY STUDIOS; the rudimentary redbrick wall has a large, red, neon ‘Love’ sign placed between a really big, fringed maroon lampshade and a sign proclaiming “Open 24 Hours”.

At the top of the stairway is the back entrance to City Studios. A project of Social Futures Initiative, a not-for- profit organisation with a strong community-based ethos, the studios were co-founded by architectural master’s student Jeremy Gilmore.

They offer an innovative concept in affordable city desk space aimed at providing facilities and services to the creative community.

Operational for about three months, architects and other creatives use the lively, warehouse-like loft space.

And situated above JB Hi-Fi and accessible from Adelaide Street, the first floor will provide an upmarket, studio environment for permanent desk space. There are plans afoot to offer space for users who require “hot desk” space for limited and flexible periods.

The hip and happening City Studios have been involved with the revitalisation of the Lane and ran Glow 32, a space used in collaboration with council’s Inhabit Fiesta, to host art exhibitions, installations and gigs at 32 Burnett Lane.

Whether the council succeeds in establishing the lane as a permanent Melbourne-type inner city lane, with bar/coffee shop/ restaurant space remains to be seen.

But hey, take a walk; the lane is well worth the visit.