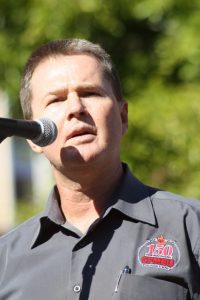 Dozens of construction workers jammed into the Brisbane City Council public gallery this week to support a union representative addressing the council on their behalf.

“The outlook is anything but encouraging,” he said.

High fees and red tape held up projects that could create jobs and support the construction industry in Queensland, he said.

Mr Ravbar said 10,000 jobs were set to disappear from the industry in 2010-11, and called on the council to fast-track development applications to provide more jobs for workers.

Speaking outside the council chambers, Mr Ravbar said development applications often get tied up due to bureaucracy and politics.

“I’m getting frustrated about the bigger process where things are just getting bogged down in political games,” he said.

“Absolutely, we’re committed to trying to push through these development plans and proposals,” he said.

Cr Newman said the Labor Opposition had a history of voting against neighbourhood plans and played politics with development applications.

Mr Ravbar said the CFMEU was about representing its members first and foremost, and not supporting either side of politics at the expense of its members.

“They want good, strong representation. If it means it causes a bit of a roadblock with the Labor side of it, well we need to cut that out, we need to get things fast-tracked and moving on forward,” he said.

But Opposition leader Shayne Sutton said the Lord Mayor’s comments were dishonest, and he was trying to shift the blame from his own administration.

She said development applications were sometimes held up for years on the desks of council officers before they even got to council.

“He’s got his ‘can do’ team and things still aren’t getting done,” she said.

“There are a lot of efficiencies that could be made,” she said.