Candidates take to the buses 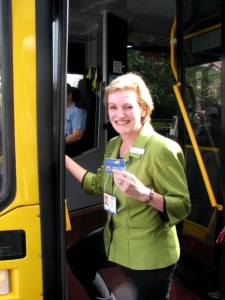 Three candidates in the federal seat of Ryan last week battled overcrowded buses and tight schedules to get to their campaign commitments. The were trying to show voters they understood the issues around public transport by actually using it.

Ms Broadbent said she the hoped the challenge would encourage federal government investment in public transport, and speed up the upgrade of bus lanes on the Centenary highway.

“We believe this ‘walk in the shoes’ experience will show why we need faster, cleaner and cheaper public and active transport options.”

Unlike regular commuters, the candidates were given free GoCards pre-topped with $20 credit, maps, timetables and their very own travel companion courtesy of ACF volunteers.

The “challenge” highlighted some dissatisfaction with bus services, in line with Translink’s 2008- 2009 report that fewer than 50 per cent of bus passengers are satisfied with the reliability and frequency of the service. 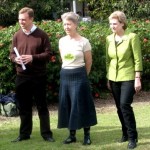 “Everyone I have talked to is concerned about bus services being overcrowded, slow, and not frequent enough,” Mr Miles said.

During the day, Mr Miles said he was left behind by a full bus and criticised the Brisbane City Council on Twitter, posting “BCC boasts about passenger numbers – how about reporting proportions seated?”

Ms Prentice said she recognised the urgent need for more infrastructure and a better integration of public transport, but added Brisbane was on the right track.

“With the record number of new buses in Brisbane at the moment we’ve taken patronage from 2004 at 44 million, to last year 78 million passengers on public transport on the buses in Brisbane.”

Independent MP Michael Johnson, who did not take part in the Challenge, said he understood all too well the issues surrounding public transport and congestion in Ryan without needing to participate in a “publicity gimmick”.

“I don’t need to spend a day on public transport to know that the services are inadequate, that’s why I purchased a fuel efficient scooter which I have been using for the past three years,” he said.

In October last year, an Australian Bureau of Statistics survey showed that 65 percent of Brisbane adults did not use public transport, with the most common reason for not using it was that they used their own car for comfort and privacy.

The next two most common reasons reported were “inadequate services”, and “no service available at the right time”.