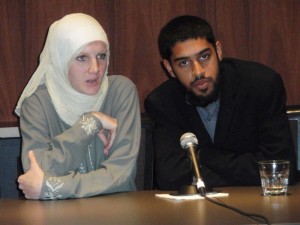 An Australian wounded in the Gaza flotilla raid has accused the Israel military of brutal conduct.

Mr Ahmed Talib was speaking at an Amnesty International forum in Brisbane on Saturday.

The United Nations will this week begin its investigation into the raid on the aid flotilla that left nine activists dead and dozens wounded, including Mr Talib, who is a student in Australia.

Mr Talib and his wife Jerry Campbell (pictured) were aboard the aid ship Mavi Marmara when Israeli soldiers boarded the ship about 4.30am on May 31 this year.

He said the attack on the Mavi Marmara was unprovoked, and despite Israeli accounts that the soldiers were acting in self-defence, the helicopters opened fire before soldiers boarded the ship.

“Most definitely I could hear the soldiers shooting from the helicopters…it was after that the soldiers were hit,” he said.

He said he saw no weapons during his time on the ship, and that the knives and axes the Israeli soldiers assembled as evidence were retrieved from other parts of the ship.

“When I was on the ship what I witnessed was not any of the human rights activists with any weapons at all,” he said.

Mr Talib said he was shot twice in the leg during the raid.

He had been denied medical treatment and the Israeli soldiers kicked at his wound, jeered at him and forced him to walk around the ship on his wounded leg, Mr Talib said.

Ms Campbell said she was enlisted to give medical attention to activists who had been shot or injured after the fighting began.

She said the gunshot wounds on the activists she saw were consistent with executions and aggressive gunfire, not self-defence.

“There was no way that they were killed in self-defence. They were clearly executed,” she said.

Amnesty International Queensland and Northern New South Wales branch president David Forde said it was significant Israel had agreed to co-operate with the United Nations inquiry, but there were still concerns about whether the inquiry would be independent, open and transparent.

He called on the Israeli government to release the digital cameras, photographs and footage they had confiscated from the activists during the raid.

“If they feel they’ve done nothing wrong, they’re justified in their actions well let them release all this information and let them clear their name.”