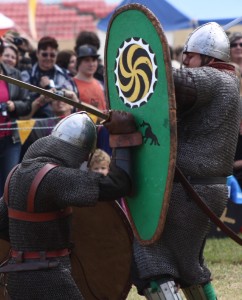 Thousands of lords and ladies turned out to re-create history and celebrate all things medieval at Caboolture last weekend.

Abbey Museum CEO Edith Cuffe said the festival was the largest of its kind in Australia, drawing more than 14,000 visitors last year.

“I think we’re going to top that significantly, so we’re very excited about that,” she said.

But the event had a relatively low key beginning as a fundraiser, back in 1989.

“In the very first year we had 30 reenactors and 300 guests come. We thought it was pretty spectacular,” she said.

“It’s grown exponentially. In 2000, we went to a weekend event and we also introduced a banquet at that time. And it’s just grown ever since then.”

Ms Cuffe said the festival was popular because it provided an accurate showcase of our common heritage and our cultural roots from the European middle ages.

“One of the things with our festival that we believe has made it grow successfully is that we have a high commitment to authenticity,” she said.

“People have a real medieval experience and actually engage with middle ages on so many different levels.”

“On the field today I think we’ve got 26 combatants in the tournament, plus all of their attendants, the marshals, the heralds, the ladies, the whole works,” he said.

He said his group drew on an electronic database of 86,000 files and his personal library of 3,500 books to ensure their clothes, armoury and fighting techniques were the same as they were six centuries ago. 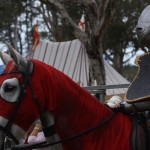 “Quite literally, everything from textiles, buttons, spoons, saddles, swords, tents – everything should be as close as possible as we can make it.”

Although he said participating in battles could be dangerous, the knights of his order were all fully trained.

“Most of our guys train for at least 12 months before we authorise them on the field and its a constant assessment process, so if we don’t think they’re up to scratch we take them off the field.” he said.

“The main thing is that people are not out there in the attitude to hurt each other because the people you’re fighting are your mates.”

One Response to “Tournament attracts cast of thousands”