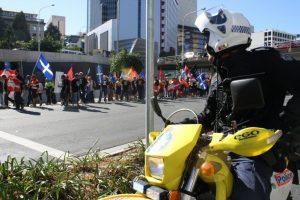 Construction union leaders at a Brisbane rally last week threatened to take nation-wide industrial action if any construction worker was jailed under the current Australian Building and Construction Commission laws.

In a fiery speech to hundreds of industry workers, Electrical Trades Union assistant secretary Allen Hicks threatened industrial action if the ABCC laws were used to jail any construction worker in Australia.

“We’ll send a clear message to both sides of politics that if any worker in this country is jailed under these laws then they better be prepared for the biggest f…ing industrial dispute this country has ever seen,” he said.

In a motion moved on behalf of construction unions, Mr Hicks said the ABCC had too much power over the rights of workers and called for the government to disband the Building and Construction Commission immediately.

Watched by police (see picture) the crowd of hundreds of construction workers carried the motion.

Builders Labourers Federation of Queensland state secretary Greg Simcoe said the building commission’s laws were too powerful as they denied construction workers the right to refuse comment at a compulsory ABCC examination.

“Everyone else in this country, whether you are an illegal immigrant or not, has the right to silence – except if you are a building worker,” he said.

But ABCC commissioner John Lloyd said the Building and Construction Industry Improvement Act 2005 was in place to protect workers and the commission used fairness in the application of their powers.

“The ABCC exercises the compliance powers responsibly and with consideration. Significant safeguards are in place for witnesses, including the protection that answers given cannot be used against the examinee in legal proceedings,” he said.

Federal member for Blair, Shane Neumann, said organisations like the ABCC were not a good way to manage the building and construction industry in Australia.