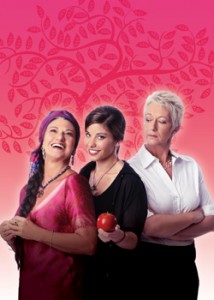 Reluctant cleaners watching this clever play will be relieved to note obsessive cleaning and too much attention to fastidious detail may blunt your passion for life!

She hires a young Brazilian to clean her house, Portuguese-speaking Matilde, who fantasises about the happiness of her dead parents. Their legacy to her was laughter, and they make cameo appearances in Matilde’s yearning narrations.

Matilde is a wannabe comedian, perpetually in search of the perfect joke and depressed by her aversion to cleaning.

Enter Virginia, Lane’s repressed housewife sister who fills her days cleaning and performing tasks for others. Unbeknown to Lane, Virginia cleans her house for Matilde in a mutually beneficial arrangement, curing her depression.

Meanwhile, Charles, Lane’s busy surgeon husband, finds his “bashert” – his intended spouse – in the form of the voluptuous Ana, a passionate Latino patient on whom he performs a mastectomy.

The unsuspecting Lane has her perfectly ordered world turned upside down by Charles’ revelation of infidelity, and after some soul-searching, the four women become close friends, united by the recurrence of Ana’s illness.

Sadness and humour go hand in hand as the characters evaluate life, love, laughter and meaning in a play that is both funny and touching.

The play is laced together by straight-talking Satchwell; with her expressive face and beautiful smile, she shines as Matilde. Carol Burns is brilliant as the under achieving sister, and it was a joy to watch her “lose it” when she finally lets it all out!

In a smart move, the designer of the simple set allows the audience to simultaneously glimpse the parallel lives of Charles and his new love Ana, as their “sea-view” flat is placed above Lane’s stark living room.

Perhaps a note from the director, Kate Cherry provides the best comment on the play, saying, “It is a wonderful reminder in this busy world that we should live life to the fullest, with joy and passion.”