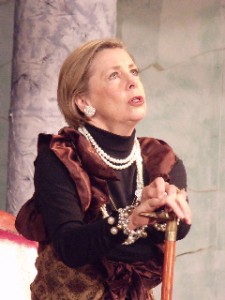 The wheels within wheels, the corruption, the bribery and the back room deals are as much a feature of modern politics as they were one hundred years ago.- Nigel Munro-Wallis, director.

But Sir Robert’s dirty past is about to haunt him when Mrs Chevely, a party guest, arrives.

The femme fatale of the play, Mrs Chevely (pictured below) holds a secret Cabinet document that could ruin Sir Chiltern, exposing the true origins of his wealth and repute.

Mrs Chevely uses the damning letter to blackmail Sir Robert into supporting a scheme to build a canal in Argentina, to which he reluctantly agrees.

Lady Chiltern is devastated when she hears of her husband’s misconduct, and while the Chilterns’ future as a married couple seems doubtful, Mrs Chevely’s snaky habits of bribery eventually come back to bite her. 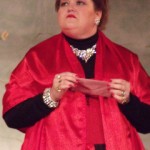 Despite being backed by an unimaginative setting of a couch, a table, and a few indoor plants, the cast carried Wilde’s challenging script with apparent ease and with a good level of energy.

Director Nigel Munro-Wallis’s passion for all things Wilde was obvious in his ability to choose his actors for their roles, as well as creating their Victorian styled costumes.

John Ashton and Paula Chiverall as the Chilterns are passionate and convincing as a married couple in troubled times, and Samantha Colwell as Sir Robert’s sister adds an extra element of humor in her performance. June Balfour as Mrs Cheveley carries the role off well with her posh accent and head over the shoulder tosses to show her disregard for anything or anyone.

Oscar Wilde’s An Ideal Husband will be performed at the New Farm Nash Theatre from July 10-31.