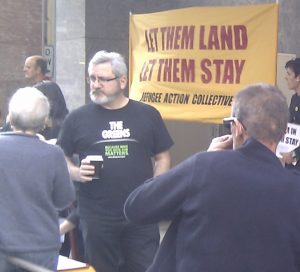 Greens candidate for the seat of Brisbane Andrew Bartlett (pictured) said people were very disappointed at how badly they had been let down by the ALP Government.

Opponents of Australia’s current policies needed to emphasise that asylum-seekers were not to be feared.

Access to it was often prohibited which meant it was very difficult to monitor conditions in the detention centre.

Immigration Department officials continually pressured some detainees to return to their homes, and some people who did so had been killed.

Mr Bartlett said Australia’s actions towards asylum-seekers were a “grotesque abuse of human rights that is deliberately brutalising some of the most vulnerable people on the planet”.

The current system for assessing asylum-seekers’ claims was not transparent, because the Regugee Review Tribunal may not reviewmany Immigration Department officials’ decisions.

“Let asylum-seekers out of detention now, and assess them properly according to the rule of law,” Mr Bartlett said.

“There is only one race in the world, the human race,” he said.

“This nation deserves a great deal more than the intimidated and marginalised leadership Abbott and Gillard are trying to offer.”

He asked how Tamils could be safe in Sri Lanka when the UN office in the Sri Lankan capital Colombo had been attacked this week.

Fr Jordan said Australia had a responsibility to process refugees here, not in East Timor which is already struggling.