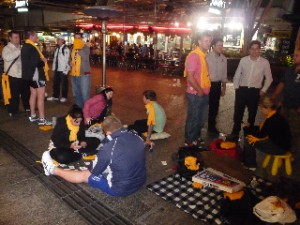 Hundreds of die-hard iPhone fans lined up outside the Queen Street Mall’s Optus and Telstra stores for this week’s launch of Apple’s iPhone 4.

Harsh criticism of poor reception from reviewers did not stop customers from queueing outside the stores from midday on Wednesday.

But Optus staff remained tight-lipped on whether they had enough phones for the increasing crowd.

At the head of the Optus line university students Michael Smart and Andy Ley were counting the minutes until the doors opened.

“We’ve never done this before, but I bet there’s an iPhone app for it,” Mr Ley said.

But it was an 8am start for Apple’s Chermside store and a 9am start for most other phone retailers.

One Response to “Brisbane fans give iPhone a good reception”