One man dares to review all 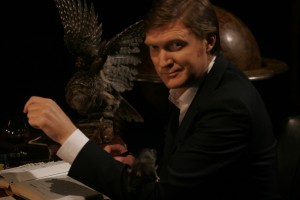 Chances are you have never met anybody like Myles Barlow and you’ve never seen a show quite like his.

The premise is simple enough: a half-hour show where an awkward host with perfectly parted hair gives reviews with a star rating.
The show begins with the narrator making a bold declaration. “Whilst other critics waste their time on trivial matters like film, food or art, one man dares to review all facets of life at your behest…”

So what are these facets? Myles, played by Phil Lloyd, in his first six-episode season reviewed, among other things, voyeurism, lying, fishing without bait, divorce, vanity, inter-generational romance, betrayal, paying for sex and even murder. Yes, Myles gave murder half a star.

“I found the smashing in of the teeth to be particularly unsettling,” Myles explains deadpan after he killed his local newsagent.

Filming the murder review involved Myles waiting in a dark alley at night with a knife ready to stab his newsagent to death.

“Because we were filming it in the pouring rain, and with no budget, we didn’t have proper signage saying we were a film crew. So our producer kept having to chase after members of the general public who’d grabbed their phones and begun to call the police, to tell them that it was okay – it’s just a comedy show, which means it’s okay to kill people,” Lloyd told Newsbytes.

At first glance Review seems to be a genuine documentary. The realism makes for uncomfortable, albeit deliciously chuckle-worthy, viewing.

While Lloyd would not divulge dollar figures to Newsbytes, he acknowledged the show was made on a pittance.

“Our entire first series was made for less than is often spent on a single episode of
most other narrative shows,” he said.

Lloyd and his associates were creative and successful in managing their extremely limited budget.

“The reason we reviewed ‘Risk’ with Myles smuggling drugs out of SE Asia was because Trent (the director) happened to be over there already, on an unrelated trip. So we tried to think of an idea where we could take advantage of that. We came up with drug smuggling, bought a dirt cheap plane fare so I could go over there and meet him, and then we traipsed around the streets shooting it.”

Lloyd’s dark twisted sense of humour could be easily misunderstood but his risks paid off in the form of an wickedly clever and amusing first series with true comedic depth: the brand of humour that causes acute pain to internal organs.

“I am thrilled so many people got it and liked it, and I really appreciate the encouragement and positive responses we got from viewers,” Lloyd said.

The response was positive enough to warrant Lloyd to review the 2009 Logies as Myles Barlow and the creation of second season of Review.

“It will be the same format as the first series. With the exact same ideas, re-shot, in exactly the same way. It was too hard to come up with any new ones. I hope nobody notices.”

Lloyd said that the second series of Review is imminent but is yet to be announced.

3 Responses to “One man dares to review all”