Naughty girl sent to the front of the class 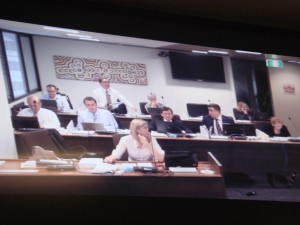 Nicole Johnston sits alone at the front bench on the opposition side of the Brisbane City Council chamber.

She is like a naughty girl forced to sit in front of the headmistress. The council’s headmistress is chairman Margaret de Wit, who has twice this year thrown Cr Johnston out of meetings after clashes and warnings.

Behind the independent councillor sit the official Opposition. Cr Johnston was elected as a member of Lord Mayor Campbell Newman’s Liberal Party team, but resigned last month after continuous differences with the party which rules City Hall.

From the viewpoint of spectators in the public gallery, whose only view of the non-Administration side of the council is through a closed circuit TV, Cr Johnston appears to dominate the opposition.

But she herself labels the new seating arrangement a waste of money.

At last Tuesday’s meeting when she took her new seat for the first time, Cr Johnston moved a motion -seconded by Opposition leader Shayne Sutton – to condemn the “Administration’s additional unnecessary expense” by installing additional seating.

“It is a deliberate act to paint me as an Opposition councillor and as an ALP supporter,” Cr Johnston said.

Cr Johnston said she was not privy to costs regarding the installation of the new table.

Meanwhile Cr Sutton said she was unhappy about being asked by chairman Cr de Wit to decide on Cr Johnston’s new seating.

“I am very, very, very uncomfortable at being asked by the chairperson of this place to make decisions on behalf of Liberal Independent councillors because Cr Johnston does not answer to me as a member of the Labor Opposition, she is quite clearly a Liberal Independent,” Cr Sutton said.

“There was an expense for making these Chamber arrangements, because when I walked in here there were three or four guys working on the wiring, they were working on the furniture relocation, the furniture, all of that kind of stuff. That was a cost,” she said.

But Council chairman and councillor for Pullenvale, Margaret de Wit, told Newsbytes that costs were minimal and it was standard procedure for non-Administration councillors to sit with the Opposition.

“Councillor Shayne Sutton is the leader of the Opposition and as such she has the right to say where she wants Opposition or non-Administration councillors to sit, and it was on that basis she was given the opportunity, if she wished, to change the seating in some way. She chose not to, so the Labor councillors are all sitting where they were so therefore Cr Johnston goes to the additional seat put in,” Cr de Wit said.

Cr de Wit said she had also tried to solve the issue of Cr Johnston’s workspace.

“Before Cr Johnston resigned, she refused to use the Administration lounge even though she had full access and she would sit in the corridor and tell journalists and everyone, ‘I’ve got nowhere to go.’

“We then changed her access to give her access to the non-Administration councillors’ lounge and she won’t use that either, and she’s been demanding … her own little office somewhere and yet she’s trying to make an issue of the tiny cost in appropriately relocating her,” Cr de Wit told Newsbytes.

“When Council is sitting, all 10 Labor councillors happily work from a single, shared office space on Tuesdays and Fridays,” she said.

“It’s concerning that the LNP Administration has refused to provide the new Liberal Independent councillor with her own secure space to work from.

“As a Liberal Independent, I believe Cr Johnston is just as uncomfortable being forced to share quarters with Labor councillors as we are.”

But Cr Johnston, in the council meeting last week, said she did not need her own office.

“I would really like though somewhere private where I could do some work, but I don’t need a purpose built office. I will sit in this Chamber in afternoon tea and at dinner break,” Cr Johnston said.

Picture shows independent councillor Nicole Johnston in her new position in the front row of the non-Administration side of the council chamber. On the right in the second row is ALP Opposition leader Shayne Sutton. Next to her is deputy Opposition leader Milton Dick. Standing in the back row is Cr John Campbell, while in the back row on the left is Labor elder statesman and former deputy mayor David Hinchliffe.