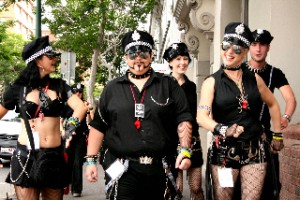 Once a marker used by Nazis to identify homosexuals for persecution, the hot pink triangle has been reclaimed – with pride!

It’s a symbolic reminder of the ongoing journey for recognition as experienced by the Lesbian, Gay, Bisexual and Transgender (LGBT) community. This is celebrated in the exhibition “Prejudice and Pride” at the Museum of Brisbane running until October 17.

Thought to be the first of its kind in Australia, the exhibition comes 20 years after the decriminalisation of homosexuality in Queensland and runs in conjunction with the Pride festival.

“The exhibition is a dynamic one with related events. It has thoroughly researched history panels where people will unearth little known facts about the LGBT community from the 1930s through to current times,” curator Carol Low said last week.

“There is a huge mosaic wall based on photographs of queer people, outfits from people involved in the entertainment industry as well as from the drag scene. We have an array of different rainbow items as well as exhibits of moving, personal letters.”

Ms Low said the rainbow became a symbol of homosexuality in 1978 when a rainbow banner was adapted in the days of gay liberation in San Francisco. Herbert Baker, inspired by Harvey Milk, created the first flag as a positive symbol of gay pride and in Florida 2003, he unfurled the Rainbow 25 Sea-to-Sea flag measuring 2.01km. This was later shared with 100 cities around the world.

“The community are fortunate to have a portion of the huge flag from the United States; it measures 8m by 6m and needs 15 people to carry it! It will feature in the Pride Festival Fair Day march on Saturday 12 June,” she said.

The meanings of the adapted rainbow colours are: red for life, orange for healing, hot pink for sexuality yellow for the sun, green for nature, indigo for harmony and violet for spirit. Turquoise, for art, has been dropped from some flags.

“We have a big emphasis on places in Brisbane that have a LGBT flavour – it is part of our re-mapping of Brisbane as a queer city,” Ms Low said.

The exhibition celebrates the achievements and contributions members of the LGBT community have made to Brisbane while reflecting the real effects discrimination has had on their lives.