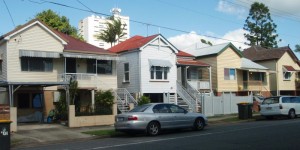 Kangaroo Point residents are angry about Brisbane City Council plans they say will destroy character housing in the area.

“This is a heritage area. This is where tourists come to see Brisbane at its absolute best,” he said.

“The objective of tonight is to get people understanding that Kangaroo Point is under threat. Make no bones about it, this will destroy Kangaroo Point.”

Cr Abrahams said residents were worried many character houses in the area would lose their protection, and developments of up to 20 storeys would be allowed in some streets.

“There is a lot of opposition to the removal of the tin and timber houses in the area called Raymond Park South,” she said.

She said she counted 155 old tin and timber houses in the area which would lose their protection under the draft.

But Neighbourhood Planning and Development Assessment Committee chairwoman Councillor Amanda Cooper said most character housing in the area would be protected.

“The Draft Renewal Strategy ensures that more than 70 percent of traditional character housing in the area will continue to be protected,” she said.

The area would be improved by the plan, which would provide a greater range of services, activities and public transport for residents, Cr Cooper said.

Maree Avalos of Preserve Kangaroo Point said although the residents were not against all development, 20 storeys was too high for the area.

“It doesn’t make sense to impose these sorts of building approvals across an area that’s basically 120 years old,” she said.

“This 20-storey proposal here is like having two blocks of Telstra towers, wall-to-wall across streets that are not even wide enough for two cars to park on either side.”

He said the developments were being done without consideration of the overall effect, and the infrastructure of some inner-city areas would be unable to cope with a larger population.

“It’s a question that needs to be examined in Kangaroo Point,” he said.

But he doubted the infrastructure in the area could cope with the extra 6,000 residents and 14,000 daily workers proposed under the plan.

Members of the community are preparing to meet with Cr Cooper and city planners at Kangaroo Point cliffs on Saturday, June 5 to voice their concerns.

Cr Abrahams urged residents to contact the Council and the media throughout the draft process.

She said the strength of the community meant it had an opportunity to make changes to the plan.

“I believe that if it stays focussed, it has all the potential to turn around and take some of the excesses away from this proposed plan,” she said.