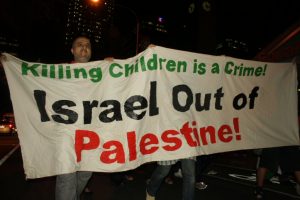 Hundreds of pro-Palestinian protesters marched through the city on Friday night protesting against the deaths of 10 people when Israeli commandos boarded a flotilla carrying humanitarian aid and activists to the Gaza Strip.

The march followed a similar gathering on Tuesday night.

“Israel now don’t have any regard for human life. Of course we know that they’ve treated the Palestinians for the last 62 years with absolute scant regard and lack of humanity,” she said.

According to United Nations Assistant Secretary-General for Political Affairs Oscar Fernandez-Taranco, at least 30 people were injured, including Israeli commandos and one Australian who received a gunshot wound to the leg.

He said the flotilla was carrying educational, medical and construction materials and approximately 700 activist and parliamentarians.

Israeli Prime Minister Benjamin Netanyahu said the flotilla caused the attack, and its primary objective was not to deliver aid, but to break the Israeli blockade against the Gaza Strip.

Although Prime Minister Kevin Rudd has condemned Israel’s actions, Foreign Minister Stephen Smith has given no indication of considering the protesters’ demands.

“Well, look, it’s a terrible and shocking incident and I think people have genuinely been shocked by it. But I think we need to proceed very calmly. There are always claim and counter-claim,” he said.

Protester David Albuqurque said the Australian government was treating the attack on the flotilla as a public relations scandal and nothing more.

Mrs Zahran said Australians as a people also need to stand against Israel by boycotting all Israeli products.