A bikini is not a bikini unless… 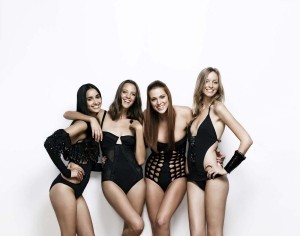 A bikini is not a bikini unless it can be pulled through a wedding ring, according to the new “Exposed” exhibit at Queensland Museum.

The exhibition is a showcase of Australia’s beach identity and the development of a million dollar industry that now has its own fashion week.

The development is a seductive one that was, and still is, closely tied with women’s rights.

A century ago, it took five square metres of fabric to make one swimming costume. Today it takes less than a tenth of that. The exhibit follows that evolution, from the full length, stockinged Victorian costume, to the modern form.

The exhibit begins where the bikini did and starts in the ‘50s. In an era of pin-ups, the bikini reigned supreme. Brigitte Bardot, “the original bikini girl” has her own section, as does Marilyn Monroe.

Old Hollywood posters show the fascination the public had with bikinis during the 1950s. The exhibit goes in chronological order, and develops from the girlish costumes of the ‘50s to the edgier designs of the ‘70s.

This was when swimwear began to lose its practicality, and gained a status as a protest garment. The designs from the ‘70s show an avant-garde approach, only to turn back to simpler designs for the current generation.

For close to a century swimwear was an issue tied almost solely to women’s rights. In the 21st century, it has moved on to become a religious and racial issue.

The exhibit features a “burquini”, designed to be compliant with religious beliefs of Muslim women. It does not show the arms, legs or hair, and is made of regular swim shirt material.

It’s featured next to a protest surfboard painted by artist Phillip George. George used graphics from mosques on the surfboard and painted them in the rusty colours of the Australian outback. It was a response to the 2005 Cronulla race riots and attempted to reclaim the beach as a multicultural place.

The riots received negative press worldwide and the exhibit shines an uncomfortable light on it. They began on beaches and still have an impact on the image of beach culture. The riots meant the industry moved away from women’s rights and cemented itself as a religious issue.

For such a relaxed image, our beaches and therefore swimwear are so closely tied with national identity that it almost always brushes with controversy. The exhibit tries to show that history goes deeper than the superficial fashion aspect.