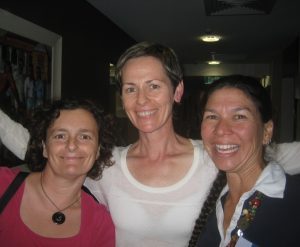 The decision comes after local parent Linda Hogendoorn urged councillors to install a pedestrian crossing so residents and students of West End State School could safely cross the main road to access nearby Davies Park.

During an impassioned speech in the Council Chamber this afternoon Mrs Hogendoorn (pictured with, from left, fellow parents Fiona Redfern and Corrie MacDonald) highlighted the current traffic dangers and called on the council to act before it was too late.

“Students cross Montague Road to Davies Park for athletics, cross country and soccer practice and we often have to get police to stop traffic to allow 300 students to cross the road safely,” she said.

“We need a safe pedestrian crossing before it’s too late and the riverside precinct is only going to get busier with all the development.”

Local Councillor Helen Abrahams welcomed the news and said the decision was finally a win for “people power”.

“I have requested funding of the Montague Road traffic lights for two years in a row. During that time, the need for the lights has increased,” she said.

“The ground swell of community concern and demand for the traffic lights was rewarded today.

“Finally we see infrastructure in place before development begins.”

Cr Newman said further details of the funding would be available in the Brisbane City Council 2010/11 budget to be announced next month.