Waiters on the run 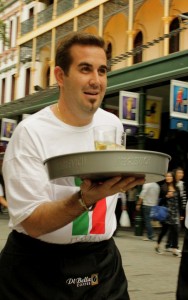 Waiters and waitresses raced up and down Queen Street Mall on Friday, forbidden to spill a drop from the glasses of wine on the trays they carried. They were celebrating Italian Week which runs from 26 May to 2 June.

The Waiters’ Race, or Corsa dei Camerieri, saw staff from some of Brisbane’s Italian restaurants compete to be named Brisbane’s Fastest Waiter.

Frank Paolino (left) of the Dolce Sapori patisserie in Clayfield claimed the title.

He said his victory was due to many years working in restaurants. He plans to defend his title next year.