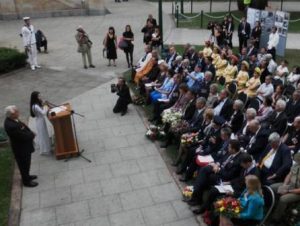 Vietnamese Australians paid tribute last week to their countrymen who were persecuted when the war between the North and South ended in 1975.

The ceremony at Brisbane’s Anzac Square was also an opportunity for the Vietnamese community to show its gratitude for Australia’s commitment in the war.

The ceremony was held in partnership with RSL Queensland.

Queensland chapter of the Vietnamese Community in Australia’s president Dr Cuong Bui said he was among the 3 million forced to leave their homeland, with 200,000 taking refuge in Australia.

Dr Bui said he served as a doctor for the South Vietnamese army throughout the war and at its end was listed as an enemy of the new government.

“I had no choice but to leave Vietnam because anyone who had fought in the war against the North were being sought out,” he said.

“If you were caught you would be imprisoned or killed.”

Vietnamese Community in Australia external affairs vice president Kieu-Oanh Do said she lost her grandfather and two uncles in the war. Her father was captured and imprisoned.

“I remember very clearly visiting my father in the prison camps when I was young,” she said.

“This day brings back many sad memories for myself and Vietnamese communities all over the world, which is why it is called the Vietnamese Day of Mourning.”

More than 3 million Vietnamese people were killed during the war.

Australia’s commitment in the war in Vietnam began as a band of 30 soldiers in 1963 and over the following decade grew to 7,672 soldiers.

The war continues to have physical and psychological effects on ex-servicemen and women who survived the war.

A plaque dedicated to the Australian servicemen involved in the Vietnamese war was placed in the Anzac shrine hall.

One Response to “Vietnamese Australians remember their war”