Tough guy Schwarto is Minister for the Roses 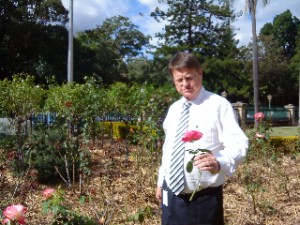 After two straight hours sledging his opponents in the bear pit of Queensland Parliament and copping warnings from the Speaker, you’d think Minister for Public Works Robert Schwarten would be panting in the corner, getting a massage and towel-down from his support team.

But no, head-kicker “Schwarto”, as he’s known, was in the parliamentary rose garden plucking a bloom for a young lady.

“You’ve got to smell the roses,” he said, when asked about his change of tack. “This is what’s important.”

The Labor member for Rockhampton’s gentle words were a contrast to the morning’s badinage at last Wednesday’s sitting, including such gems as “Caught out! You are dishonest, you are decrepit and you are duplicitous”, “Stand outside and ask that question. Go on”, “and no amount of interjecting, with your idiotic bird-like behaviour, will change that”, and “another one from the honourable member who is rudely interjecting at this moment and another one from the Clayfield electorate and old ‘salmon chops’ opposite”.

Further gems included: “I am not surprised that somebody like the honourable gentleman, known for his inanity of interjection in this place, would not want to be associated with building workers as he has never done a hard day’s work in his life”, and “If the ‘Tony Rabbit’ look alike over there, the mumbler that he is, had his way in this state, these people would not have jobs”.

And: “I know you do not want to hear about workers. You wouldn’t get hot on a stove. The reality is that people like the overweight gentleman over there who is taxing the health system — he should have listened to what the health minister had to say yesterday. [Interjections] Don’t deny you’re overweight!”

And: “If those opposite thought these two blokes were crooks and they covered up for them while they were on their side and in the leaky old ship that they are passing for an opposition – and they wisely as rats got off; we can tell when a ship is sinking because the rats get off”.

After repeatedly warning Mr Schwarten, Parliamentary Speaker John Mickel took aim: “Order! The honourable Minister for Public Works, I have asked you to desist. I will now take you down a process. If you again defy my orders, I will take action under the standing orders.”

But for the gravelly-voiced, pugnacious minister, it was as if he’d spent the morning playing cribbage. Relaxed and comfortable, he strolled around the rose garden at the front of Parliament House. From outside on George Street loudspeakers blared speeches from a noisy demonstration on indigenous issues. To the side, hordes of media were clustered around an Emergency Services fire and rescue vehicle, with minister Neil Roberts holding court.

Unseen by all but the intrepid Newsbytes, Mr Schwarten pointed out the roses to a young lady – “Would you like one?” he asked. “I’ll get you one.” And, producing secateurs, he stepped gingerly into the garden and emerged with a healthy pink specimen.

“I’m the Minister for the Roses,” he said.