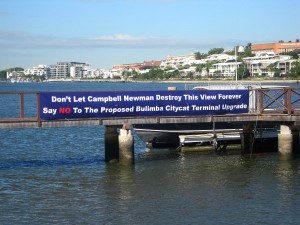 Cr Sutton said the only reason Council decided to vote urgently on the matter was because a protest sign (pictured) had appeared on a pontoon next to the terminal. She said the design of the terminal had been radically changed after it had been discussed with local residents, who were concerned about their view of the river being blocked by the new terminal.

Leaflets signed by Lord Mayor Campbell Newman were distributed at Bulimba ferry terminal on Wednesday morning. The protest sign had been removed from the pontoon. The leaflet said: “In the Council meeting of May 11, the Councillor for Morningside [Cr Sutton] spoke against the planned upgrade and led the Opposition in refusing to support the project. As a result, the ferry terminal upgrade was postponed.”. 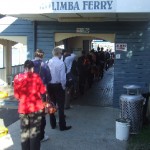 Cr Sutton said she was astounded by comments that no further redesign of the terminal was possible, and said Mr Tony Marmotta of the Bulimba Community Action Group had been told on Tuesday morning by Transport chair Cr Jane Prentice that the Regional Harbour Master could be approached to lobby for a new design. She said she wanted the upgrade to proceed but not in the way currently planned.

Mr Marmotta said yesterday the deferral of the project was a partial victory for the BCAG, but he was unhappy the project was not going ahead. He said the group wanted the original design re-instated.

The action group’s website (http://saveoxfordstreet.info) shows both the current and original designs; the original design has unobstructed views from residential buildings on riverfront just south of the ferry terminal and the current design obstructs the views with a large waiting shed.

Mr Marmotta said the current design spoiled the view for everyone, and the action group wants to work with Lord Mayor Campbell Newman to agree on an upgrade. Mr Marmotta said Cr Newman had helped to secure Tuesday’s meeting with Cr Prentice.

Cr Prentice said the project was at a critical point after two years’ work, and the terminal was over capacity, meaning passengers had to line up in Oxford St. She said the terminal did not comply with current disability laws, and only allowed one ferry to dock at a time. The current design for the new ferry terminal was the only one that would be accepted by the Regional Harbour Master and the Queensland Heritage Council, Cr Prentice said.