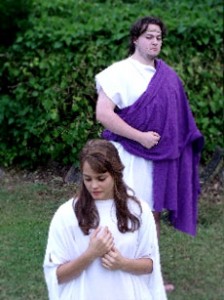 More than 2000 years since it was written, any modern staging of Antigone requires an element of creativity to make it fresh and relevant.

The New Farm Nash Theatre’s current production is certainly creative. Director Jeff Zayer has put together an eclectic production that borrows elements of ancient Greek and Roman aesthetic in the set design and costuming, mixes a traditional Greek chorus with different acting styles and uses a modern text written in Shakespearean English.

Sometimes all this works to the play’s advantage, and sometimes it doesn’t.

Antigone is the final part of Sophocles’ trilogy on the fate of Oedipus and his family. The play begins with Oedipus’ two sons, Eteocles and Polynerices fighting for control of Thebes. When they both die, Eteocles is buried, but the new king Creon denies burial rights to Polyneices and leaves his body to rot on the battlefield. Antigone, Polyneices’ sister, disobeys the king in order to bury the body, and is subsequently caught in the act and sentenced to death.

The play is devoted to the question of what is more important, duty to the king, or duty to the gods and family. Both Antigone and Creon are stubborn and proud and refuse to back down from their position, which leads to tragedy.

Zayer’s direction uses the limited space of the theatre well, with the action of the play taking place on stage and down in the aisles, which opens up the production and gives it a sense of movement. This is helped by Philip Carney’s lighting and sound and music by Sam Grey, which both make effective use of the theatre’s resources to help expand the production and give it a professional edge.

Damian Danaher, who plays Creon, anchors the play with a sensitive performance which explores the king’s stubbornness but also his conflict in trying to do what is right and just. Most of the best scenes involve the king facing off against Jessica Radvan, playing a forthright and fiery Antigone.

The chorus, despite being comprised of only three actors, fills the stage through creative direction, and comments on the action of the play with a strange combination of ancient Greek-style gravitas and Elizabethan buffoonery. It is also used to round out the cast, and each chorus member uses a set of masks hung on pillars to transform themselves into various characters throughout the script. This device is best explored by actor Josh Tregenza, who transforms himself into the cheeky Guard and the elderly Teiresias with chameleon-like changeability.

Unfortunately, the play is let down somewhat by the odd translation, a 1912 text written in Shakespearean English. This adds another layer of complexity to the text and creates difficulties in comprehension, some of which seemed to be felt not only by the audience, but by the actors themselves.

This is a pity, and detracts from an otherwise solid production of Sophocles’ Antigone.

Antigone runs until May 28 at Merthyr Rd Uniting Church.