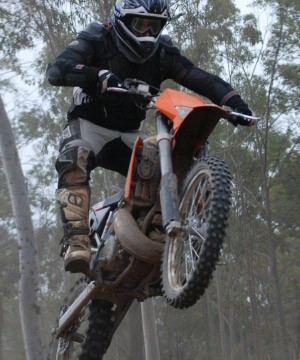 Queensland dirt bike riders will form the biggest interstate contingent of riders at the Finke Desert Race in June this year.

She said the Finke was the largest race of its kind in the southern hemisphere, with nearly 600 bike and off road buggie entries.

“We’ve had to stop taking entries for the bikes because we have reached our limit of 500 riders,” she said.

Brisbane quad bike rider Johnathon Elder said he would take his 700cc Raptor Quad bike through its paces at the Finke and hopes to finish in the top 10 for his class.

“Basically I’m just gonna go out and get a good place this year. Well, everyone reckons I’m gonna end up in the top 10 at least, ‘cos of the way I’m riding,” he said.

Mr Elder said he spent most of his spare time training for the race and looked forward to rolling over the start line.

Mr Elder said he would travel with six other riders and a team of mechanics to compete in the race starting June 12.