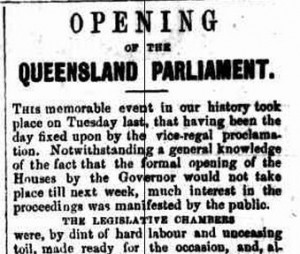 Parliament House opened its doors to the public on Saturday to celebrate the 150th anniversary of Parliament in Queensland, but a peek into the history books reveals the more things change, the more they stay the same.

When the then colony’s first Parliament opened on 22 May, 1860 it had two houses, no parties and only 26 members, but although some things have changed a lot in the past century and a half, the general principles of Parliament and the to-and-fro of politics have not.

Clerk of Parliament Neil Laurie said despite the developments in technology, the party system and protocols, an MP from the 1800s would not feel too out of place on the floor of today’s Parliament.

“They would notice some odd behaviours with computers and technology, but it still wouldn’t take them too long to get into the groove of interjecting, and ‘hear, hear,’ and ‘nays’ and everything else,” he said.

“I think if you read the debates you still have members sniping at each other and there would be interjections,” he said.

Parliamentary librarian Mary Seefried said the only records of the first few years of Parliament were the newspapers of the time, the Guardian and the Moreton Bay Courier, which documented the opening of Parliament and the subsequent sittings with their own fair share of bias until Hansard, the official record, began publication in 1864.

Although it wasn’t deemed important enough for page one, or even to go ahead of the shipping news, the Courier recorded its first impressions (extract above) of the new chambers exactly 150 years before families and tourists wandered the hallowed halls of the current Parliament House on Saturday.

The newspaper reported: “Although redolent of varnish, and having unmistakable signs of newness about them, they yet presented a very creditable appearance.”

It paid particular attention to the President’s chair in the upper house, which it said was “comfortably cushioned for any napping that the President may see fit to indulge in during the dreariness of debate.”

“On either side are ranged the honourable members, which are also of a very soporifically-inclining make,” it said, foreshadowing a problem still felt by some members at a federal level 150 years later.

Despite the professional appearance of Parliament House, the Guardian reported some anxiety in the newly elected officials.

“Most of the members appeared rather nervous upon their first entrée into legislative life, but doubtless when they begin to feel their legs this blessed state of diffidence and taciturnity will cease,” it said.

But the Courier wrote approvingly of the calibre of the new MPs.

“We have, on the whole, a very creditable Assembly as far as intelligence and capability are concerned, and each member should esteem it a duty, devolving upon himself individually, to maintain the character of the House,” it said.

Although the opening was conducted in a civil manner, there was a hint of things to come in a speech afterwards by the Member for Fortitude Valley and Premier-to-be Charles Lilley, reported in the Courier.

“Like everything human parliaments are subject to human imperfections, and I repeat, if you think their proceedings will run smoothly for the future or meet with general satisfaction, you will be most egregiously humbugged,” he said.

“Of course, no one is insane enough to expect that the current of legislation will run smoothly on,” it said.

“We must expect ‘stormy debates’ and ‘protracted discussions,’ but let us hope that there will be none of that violent personal recrimination by which far older Assemblies are oftentimes disgraced.”

The Guardian, on the other hand, seemed a little more ready for the rough-and-tumble of political debate, and likened dull speakers to a weed that needed culling. People gather on the Speaker’s Green in Parliament House at Sunday’s open day.

“We, however, give fair warning to all talkers for talking sake, that they need expect no mercy at our hands. The eradication of that class of orators technically termed ‘bores’ from our Association is as much to be desired as the suppression of the Bathurst Burr,” the paper said.

Mr Laurie said the Parliament of the time dealt with topics which still preoccupy the government of today.

But the first act of the newly opened Queensland Parliament was to take a break for the rest of the week.

Captain Maurice O’Connell moved the motion after the opening ceremony, which was immediately seconded, put and carried, and the Council adjourned until Tuesday, May 29 1860.