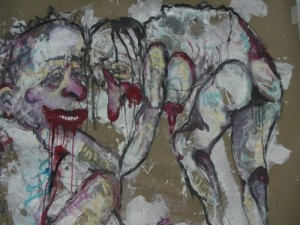 Paper is the theme of an exhibition by art students of the Queensland College of Art this Saturday.

Titled “Paper Walls”, the exhibition showcases the work of 13 students, mostly in their final year, from different disciplines.

Organised and put together entirely by students, the exhibition is part of a learning project where students learn how to put together a show, work together, and develop into professional artists.

Final year student Shayna Wells described the process as “learning the practical skills of being an artist”.

“We were given a grant from the university to fund the project, which involved the process for doing a grant application and organising ourselves to achieve the realisation of the project,” she said.

The students were grateful for local businesses that supported the project, which will transform an exhibition space on Saturday night.

“We have provided space for high school and university students before, usually for music events, although we have had art exhibitions before too,” she said.

“There is a video response to the theme – which will be pretty funny but I won’t give too much away.”